Another Ogle in America

There have been several Ogle SX1000s in America, although all of the four seen here have come back to this side of the world by now, in order of appearance to the UK, Switzerland, Italy and the UK again. One car made it the other way 'round. It was the car seen in Maximum Mini 1; spotted in London and offered for sale in 2012 (click here).

I now understand it resides in sunny California, as current owner Wade Ogle contacted me. He wrote: "Hi Jeroen, I got a note from my friend Adam that you were very helpful in answering some questions. He also said you had asked about my Ogle SX1000, which is #061 and was graciously featured on the cover of your first Mini book. Just to keep you up-to-date, I was the fellow who bought #061 from the RM Auction in London about 5 years ago, and had it brought over to California. While I am no direct relation to David Ogle (that I know of), I am a car guy with a fairly large car collection, and do share the same surname, so when the opportunity to buy this one came up, I had to jump on it. Truthfully the car has been resting quietly in my garage for most of this 5 year period, but last month my wife and I, along with Adam and his girlfriend, took the Ogle out to the 'Little Car Show' in Monterey during the Monterey car week. Indeed, the Ogle was a big hit, as few had ever seen one before, and before the day was over we were honored with a plaque. We then participated in the little car cruise, which was a lot of fun."

"Rest assured the car is being lovingly cared for, and I have made contact with Ogle aficionados and previous owners Chris Gow and Geoff Hunter, who have both been very supportive. We are now excited about sharing it once again. Our next event will be the All British car show to be held at the Blackhawk Auto Museum about a month from now. This show happens to be put on by the San Francisco chapter of the Mini Owners of America club (MOASF), which sounds like an ideal event for our little Ogle to participate in. I’m very excited!" 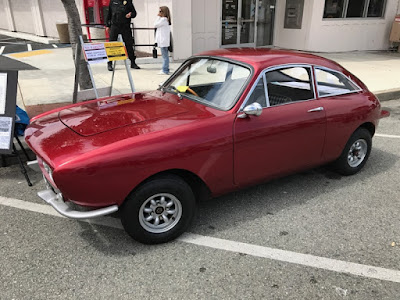 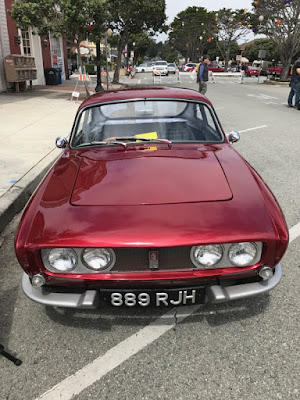 The car, seen here at the 'Little Car Show' in Monterey, was fully restored by Geoff Hunter in the UK
Picture Wade Ogle