When you've read Maximum Mini 3 (still available here when not) you have come across some truly strange Mini based creations. Some were in fact so strange that finding out more information about them proved virtually impossible. No one knew about them and no-one wanted, or so it sometimes seemed. It went for the Mini based milk float. I knew it was from New-Zealand and I knew it dated back to the 1960s but that was about it.

Now. Thanks to Miguel Plano of Canada (again!) I have found out more. Miguel found a leaflet on the thing, showing the two photographs below plus some additional words. It turns out the Mini milk float was officially named the Minimilk-float and invented by dairyman Mr. Moore of Timaru in New-Zealand. "He tows his tiny little milk lorry behind a larger vehicle on long-range work, allowing it to operate independently on local deliveries, such as in congested housing schemes; he thus effects some worthwhile savings in his transport costs!"

The creature was built to Mister Moore's own design with a 5 ft. 6 in. high cab and was built up using an 850 Mini. I wonder if any of you remember it from the days he drove it around the streets of New Zealand? 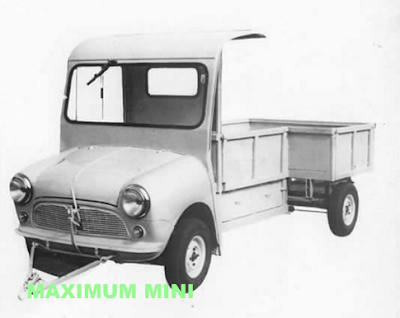 cutaway bodywork for easy getting in and out. The Minimilk-float was, rem, different!
Picture via Miguel Plano 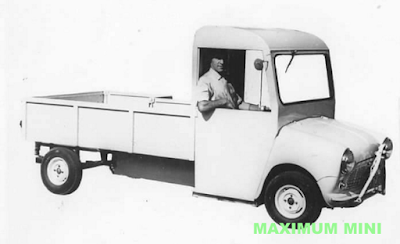 Mr. Moore added: "We know it's a queer looking thing but it is just great for the job it was built for!"
Picture via Miguel Plano
Geplaatst door Maximum Mini op 16:12