I like tales from former car owners and Unipower owner Pete Flanagan sent in another nice one. While I was at the Euregio Meeting, he spent the weekend at the Oulton Park Gold Cup with his Unipower GT. Pete: "The car hasn't been back there since Graham Goodman and Gideon Lloyd raced it there in 1968. The funny story Gideon told me was this when they were last raced it at Oulton Park in '68. He said: 'Oulton Park was our last outing in the car at the end of 1968. The brilliantly crisp, cold, sunny Sunday was topped and tailed by incredibly dense fog. On our journey back down South, visibility was zero - at one point I was leaning out of the passenger side door feeling for the kern side. Eventually fog clearing, we made the motorway and Graham opened up the Jag. I seem to recall 100mph being indicated on the M1."

"Needless to say, trailer tyres blew (melted...) and I was 'volunteered' to be 'driven' in the Unipower behind the Jag. The primitive handbrake had iced up and with no way of communicating with the Jag I became aware of flickering flames behind my shoulders. Sure enough the discs were alight."

"I promise you the next bit is true! A car overtook and flagged down the Jag. Then a guy came round to the Unipower, lifted the engine cover and fire extinguished both discs which were merrily aflame being fed by brake fluid. Somehow the magnesium wheels didn't ignite. He then disappeared into the night. That was the rather sad end to our relationship with the red devil. It was sold. Graham raced Formula 3 in Europe for 2 seasons and I got a job!"

That's another great Unipower GT tale, thanks for sharing Pete! 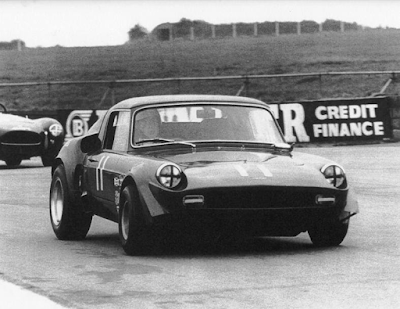 Lloyd and Goodman wanted to do endurance races with the car but it never got that far. Seen here in their hands in 1968. Note fat Brabham wheels at the back here, which did't help handling
Picture via Pete Flanagan 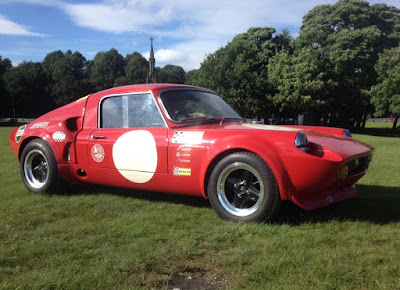