Odnik: Indeed based on a 1958 prototype Mini?

Two more pictures of 'Odnik' - the Irish built Mini special that was raced by Jack O'Donoghue in 1961 (more about it here), have come to the light thanks to Irishman Aidan Mc Grath. And I believe we can now almost surely say the car was based on a 1958 Mini prototype. The stamped grille of the car is the first giveaway, as there were only two Mini variants that had this feature: the 1958 prototypes and the Mini Van (announced in June 1960). Odnik could well have been based on an early Van, but the registration points towards something else. 'CZA333' was a Dublin registration from November 1959. Apart from prototypes, there were no vans at this time yet.

What's more, judging from the old photograph that I found and the new ones that Aidan came up with, I don't believe this car to use the longer wheelbase of the van. It looks like a saloon to me, and the same goes for the rounded rear, with the filler cap on the left. This looks like it was converted from a saloon rather than from a Van to me. Or is it? '59 Mini Register man Bill Bell said of the first photograph: "Looking at the wheel base it looks like its a modified Van. I doubt very much it's a 58 prototype. They were all in such poor state after they had finished testing and as far as we know all were scrapped."

I'm not so sure. Jack O’Donoghue worked for the Austin importers/assemblers in Dublin and may have been able to get hold of a '58 prototype Mini. Minis were built under a license in Ireland from as early as 1959. Fact is that O'Donoghue got rid of the car’s roof, modified its rear end in steel, cut the doors, lowered the handles and fitted a Sprite windscreen. He won his class during a Hewison Trophy qualifying trial in December 1961. Could the car survive? And be found? That would surely be sensational...

UPDATE 13:00: An avid reader drops me a line: "I spoke to the last known owner of the car and he can't recall what he did with it, but thinks he scrapped it. I am due to meet a previous owner next week, who used the car in the UK in '65/'66 before bringing it back to Ireland and selling it. I will ask him for his thoughts on the history of the car, as he would have known Jack."

UPDATE 8 January 2019: A sketch of the car has resurfaced, making clear it was definitely not based on an early Van. Read and see it here. 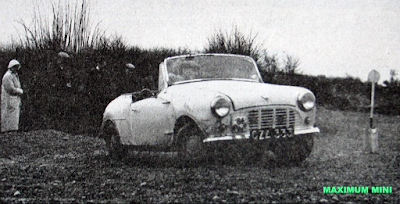 Jack O'Donoghue in action in his Odnik in December 1961. This was the only known picture of it
Picture Jeroen Booij archive / Autosport magazine 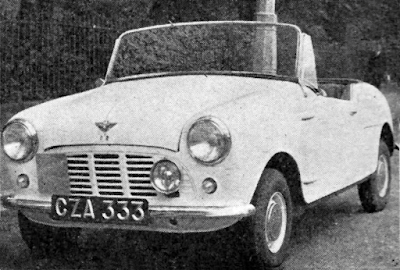 But then Aidan Mc Grath came up with this. Stamped grille points towards 1958 Mini prototype, as does wheelbase? 'CZA 333' is a november 1959 registration
Picture via Aidan Mc Grath 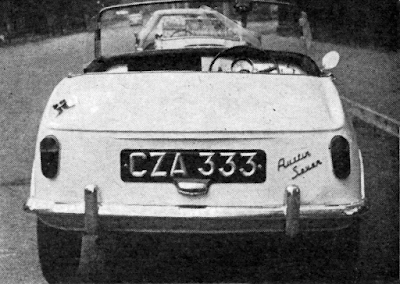 Odnik's rear was modified quite heavily, too. Again, the round shape points towards a saloon to me, as does the filler cap that is positioned at the left hand side
Picture via Aidan Mc Grath