The amount of feedback that I received during the last month has been rather overwhelming. I was sent messages, pictures, movie clips, tips and tricks from just about anywhere and I am sure they will lead to great new stories of Mini derivatives of which some you won't even have heard of.

One of the more loyal followers is Graeme Farr of Wellington, New Zealand who owned dozens of Minis and Mini variants over the last decades. Among them two Mini Marcos' and one Mini Jem, two unofficial MiniSprint racers, a Terrapin plus one of those lovely De Joux GTs. He also recognized the Mystery Mini derivative number 4 and sent in some great old magazine clippings about it. The car was simply known as the 'Elf Mini Sprint' and was indeed built and raced by Robin Officer. Graeme thinks the car, or at least its body, survives too on NZ's South island and is chasing it at the very moment. So stay tuned for that.

Meanwhile, sit back and enjoy some of the pictures from Graeme's vast De Joux files. He sent me some photographs of lovely restored cars, but I must say I prefer his shots of sad looking examples, most of which he shot in the 1970's and 1980's. Awesome! 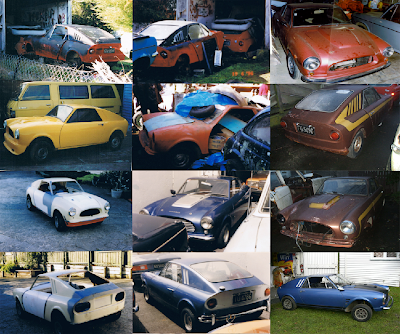