Every now and then people offer me a car for sale, ask me if I know of a certain model on the private market or see if I can sell a car for them. But to my own despair I am a terrible car sales man. I have a great nose for vehicles that seem only to sell with huge losses. What a pity, as I have had plenty of chances to do the very opposite. Only take a look at the prices of Unipower GTs for sale of, say, twenty years ago to see what could have been.
Question is what these cars are worth today. Since I finished the Maximum Mini book quite a few Unipower GTs were offered for sale, of which some have sold. The average asking price lies around the 30,000 pound mark, but do these prices get actually paid too? Hardly. The yellow Mk1 that was featured in the book too was offered for sale for at least two years. It is a stunning car that was beautifully restored, but never made its 32,995 asking price. It was sold last year for 27,500. Still a hefty price but not the sum people tend to believe they are worth. In fact the other cars offered for sale on the British and European markets are not in such a pristine condition, and so they should be worth less then 27,500. The only exception will be the white car that by now will just be finished from a thorough restoration. 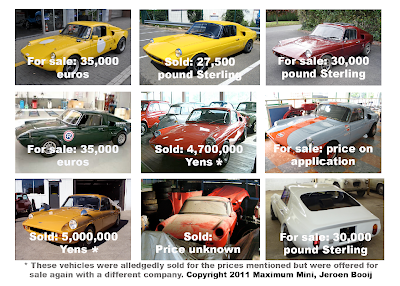 In Japan, where I know of nine Unipowers (that's at least 12% of total Unipower production!), prices seem to lie around the 5,000,000 Yen mark. That's almost 39,000 GBP and thus quite a bit more. But do these cars really sell for that money? Both the red Mk1 that made 4,700,000 Yen as the yellow Mk2 that made 5,000,000 were offered for sale less then a year after they were sold. And so it seems the cars there just rotate from dealer to dealer.

So is it impossible to become the owner of a Unipower GT for say 5,000 GBP these days? It isn't. I have heard a story of a Unipower GT that was dicovered in a Berkshire garden last year. It alledgedly stood there for twenty-odd years and the eccentric geezer owning it had to get rid of it. He is said to have believed it was a Mini Marcos. It must have been in a terrible state, but as long as you are good with a spanner and a welder you should be able to restore it to it's full late 1960's glory for a fraction of current asking prices.