This weekend I was flicking through the 1967 London Racing Car Show programme book when my eye fell on a picture of the Mini Marcos that made fame in the 1966 Le Mans 24-hour race. As you know that’s the French built and French entered car that is said to have been stolen right after the race, in Paris. Legend has it that the most famous of Mini derivatives never re-appreared. Or has it?
Oh yes, it has. And I have now found evidence.

I’m sure I had seen it before in the programme book mentioned, but never realised it was on actual display on the Racing Car Show too. Nor did I ever associate the car with the date of the show, ‘cause this is where the strange bit comes in: the show was held from January 4-14, 1967. Hang on, that’s over half a year after its legendary Le Mans outing on June 18 and 19 in 1966 and its presumed theft.

But perhaps the programme book was printed many months in advance and didn’t the Mini Marcos really appear on show in the end? Not so, as I have been looking for a picture of it on display in London, and found it. Never mind the prominent BRM racing car in the picture, it is the little yellow and blue Mini Marcos behind it that is of interest to me here. 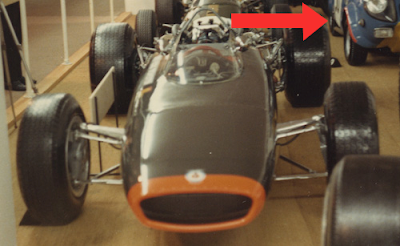 UPDATE 28 January 2011
According to Enguerrand Lecesne from France the car was indeed stolen, but much later: It was on display in 67 at April practice, 24 h Le Mans (next to the strange Hrubon car),
then raced 1000 km Paris 67 (Swietlik-Rives)
then Hillclimbs in Corsica in 68 with new owner,
then rally near Nice (a new owner who took off the big radiator, still owning it)
Back to Paris in 73 (still with big fuel tank)
Stolen Autumn 75.

UPDATE 9 December 2016
The car has been found! Click here