There are many good ways of spending Easter but our man Buffalo Bill has certainly not been drooling around with eggs as he's spent most of the days in his shed working on the CJC Bison. Good man. He writes: "I have, with much elbow grease, been able to prove that it IS possible to polish a turd! The CJC now gleams (apart from all the bits where there are chips, scratches etc.) - and it is amazing how good it looks!"

"The brakes are fixed, the master cylinders changed (which was an 'interesting' job - the builder had clearly fitted the masters before he attached the body to the chassis...) and most of the electrics now work. It was also like it had the stiffest clutch ever made in it, which was also soaked in oil, so I pulled the flywheel off (when I take the engine out, there is one part of the chassis that im going to chop and move about 10mm, that will make the job far easier) and once the flywheel was off the reason for the clutch problem became apparent, as the bronze bush in the primary gear was spinning and was so worn that it was down to the steel, it had actually overlapped itself where the split is in it. I think the gear itself is junk, but that's a job for next time."

"I've had a good response from the neigbours (bar the noise of the thing, thats another job I have to sort!), my friend's wife thought it was a TR7 while another neigbour thought it was a Ferrari (what's even funnier is that her son actually does own a proper one!). Anyway: I am going to make the templates for the glass this week so I can get that ordered, and I was hoping to be able to cut the bond and ease the glass out, but on closer inspection it is so fragile it's just going to break." 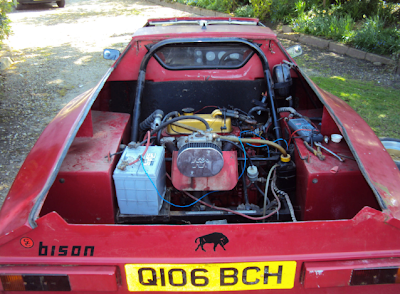 CJC Bison: clutch and most of electrics are now sorted out... 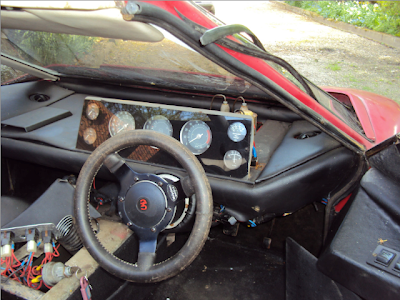