The Mini Marcos' finest hour? That has to be the 1966 Le Mans race that started on June, 19 that year on the hallowed circuit de la Sarthe with an unlikely French equipe.
It was former professional deep sea diver Jean-Claude Hrubon who had a garage in Levallois, a Paris suburb, where he focussed on Minis. When Hrubon paid a visit to the Racing Car Show in London in January 1966 he was struck by the Mini Marcos and decided to buy a very early shell with the idea to build it up as an endurance race car. Together with mechanic Claude Plisson he did just so and the car was shaken down at Montlhery on 2 April, where the engine blew. A new engine was hastily installed and the little racer made it to the Le Mans test day on 4 April where the engine blew once again due to overheating, but where it never the less was fast enough to qualify for the race in June, too. In between it did another race at Monza on the 23rd of May, too!

At the Le Mans 24 hours race the car (start number 50, as on test day) was driven by French rally driver and racer Claude Ballot-Lena and Accesory shop owner and Mini racer Jean-Louis Marnat, who both set constant lap times in the dry. Jem Marsh, who was at the race too, said to Motor Sport magazine later: "I had nothing to do with the preparation of the car and was horrified when I saw it. I didn't think it would last a lap. I went back to the Motor hospitality unit convinced that it wouldn't finish, and did my best to distance myself from it." (...) "I don't know if this is true, but I heard that Alec Issigonis was appalled at this funny little egg-shaped Mini and went home. Anyway, at 3am the car was still going and by this time I'd had a bit to drink so I changed my tune completely, saying how great the Mini Marcos was. In the early morning it started raining heavily and one of the drivers was really erratic: his lap times were all over the place. Off I went to the pits to beg him to slow him down in order to ensure that he ran the distance..."

Fortunately the French drivers did that and finished just in time to become 15th overall, and only British car (of only three) to finish. According to Marsh they should have won the Motor Trophy for that, "But we had French drivers, so weren't eligible, apparantly." It is said that the French team had nearly failed to qualify as every entry had to do a certain percentage of the winning's car distance (this system disqualified Chris Lawrence's Deep Sanderson three years earlier - click here for the complete story) and the Mini Marcos had only just managed to do so when it slowed down. It made an average of 89.7mph (143.5 km/h) and did 258 laps in 24 hours. Enough to become perhaps world's most legendary Mini derivative, but perhaps its mysterious disappearance (see here) helped a bit to achieve that status, too.

UPDATE 9 December 2016: The car has been found! Click here
Regular updates on the restoration of the 1966 Le Mans Mini Marcos here 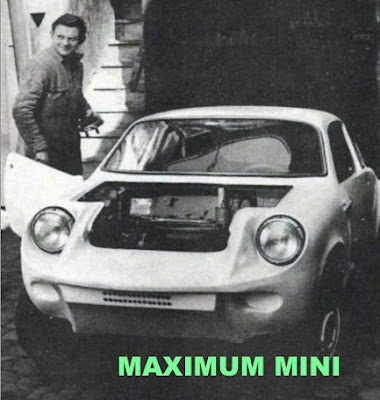 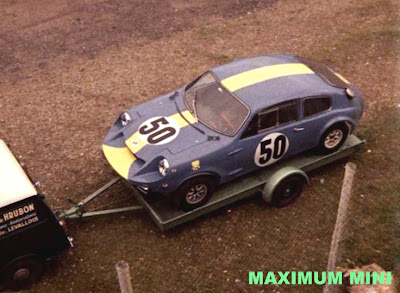 On their way to shake down in April 1966. Note small wheel arches and Hrubon works van 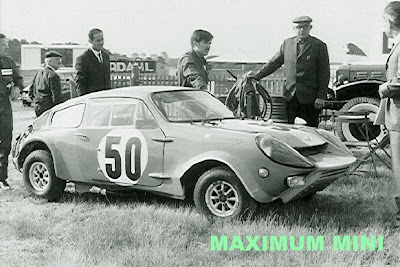 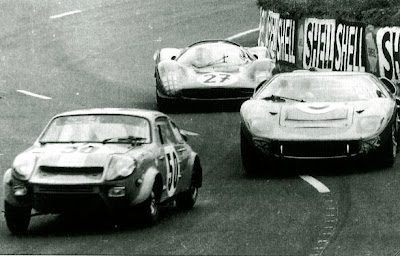 Opposition was overwhelming with no less than 15 Fords and 14 Ferraris
Picture: l'Automobile 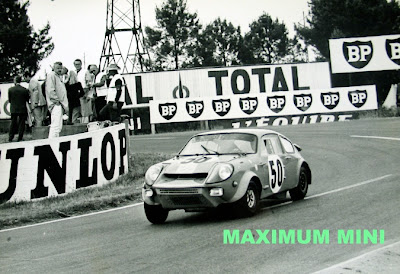 Mini Marcos did well between much bigger machines. It qualified 55th to finish 15th 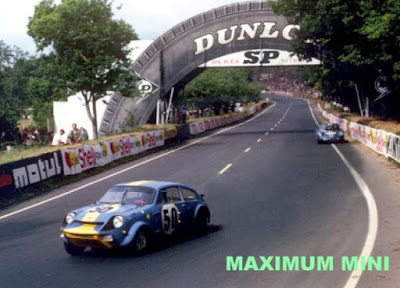