And we have something about the mysterious coachbuilt Mini Cooper S owned by Enzo Ferrari!
Italian magazine Ruoteclassiche has the car featured in their July issue, with pictures by Massimiliano Serra and words by Emanuele Sanfront. But unfortunately the article doesn't throw any new light on the car or the whereabouts of its modifications. The owner says the following about these: “I think that the modifications, to merge the styling of a certain visual impact to the sporty functionality, were the work of Carrozzeria Scaglietti. I do not know this for sure, however I believe that there could be good chances due to the relationship there was between Enzo Ferrari and Sergio Scaglietti, who merged his own company with the glorious Prancing Horse brand since the beginning of its history, and furthermore due to the fact that the paint used to modify the colour of the Mini was of the same kind used at the time to paint the production Ferraris."

The owner, Carlo Navone, is in fact the son of Giuseppe Navone who was in charge of Ferrari's testing department for race cars in Maranello from 1947 to 1950 and who won the Mille Miglia in 1948 in a Ferrari 166 S bodied by Allemano. Navone left the company in 1950 but returned in 1969 to become chief of the testing team for production cars only to leave once more at 1972. He took over the Mini from Enzo in 1970 and handed it over to his son years later. Pity he doesn't know anything more about the car's unusualities and the article just mentions them (lights, red leather seats and dashboard, radio with preset-channels, instrument panel, switches, gauges, mirrors…). The car originally came in red but is believed to have been repainted in metallic grey as soon as Enzo Ferrari got hold of it. It was grey until 2012 when Carlo Navone decided to have it repainted in red again. According to the article the 1275cc engine is said to deliver 90bhp and to come with twin Webers, but they certainly look like Dellorto's to me. Read more about the car here and here.

Thanks to Andrea Anania for the scans and the translation! 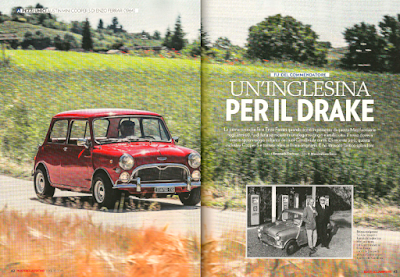 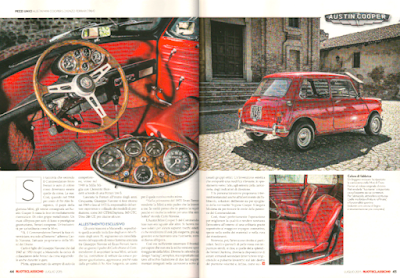 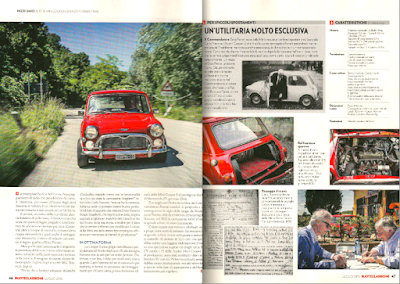