Unipower news keeps on coming in here after last week's Japanese wide bodied GT. It supposedly is not an ex-works car but one that was modified by the Lenham Motor company in the late 1990s. What's more: it is currently for sale with a company named Scuderia Old Timer in Utsonomija, Japan, see the ad here. Thanks for all the hints and tips.

Meanwhile, regular Peter Camping managed to find a good picture of another Unipower GT in racing guise: the car driven by Tom Zettinger of Luxembourg. It, too, uses wide arches and a broad racing stripe: blue on white. From 1968 to 1970 Zettinger entered the car in a number of events: mostly local hill climbs, slaloms and sprints in Luxenbourg. So far, I'd only seen a sketchy photograph of it, taken by Paul Kooyman at the International AvD-Rundstreckenrennen at Zolder in october '69. The one that Peter found is a lot better and was taken at Lorentzweiler that same year. Naturally, I wonder what happened to the car.

This list of events in which Zettinger drove the Unipower comes from this website about motor sports in Luxembourg: 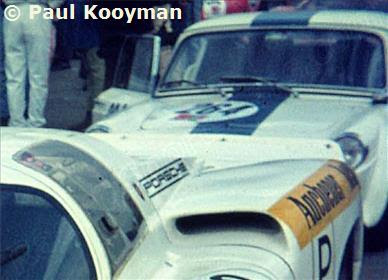 The only known picture (by me) of Zettinger's Unipower G, taken at Zolder in 1969
Picture courtesy Paul Kooyman 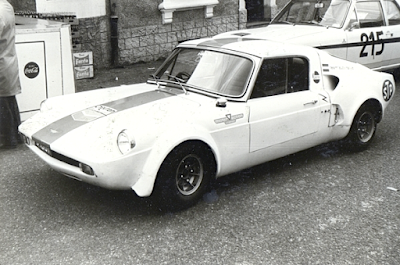 This one is new to me and it gives a better view of the car. There have to be more pictures?
Picture via Peter Camping