Some years ago I found out that the very first Camber GT made (click here) survives. But not as we know it. The car, of which beautiful film footage survives, had a Maya GT nose section fitted in its early life, and was later given a targa roof. And it did not stop there. Daniel Boucher wrote back in 2011: "I was given it by a nice chap in Wimbledon. It was painted blue and had been converted into a convertible. It had a Cooper 1275 engine and Cooper S brakes but when I received it it was a rite heap and I spent about a year restoring it. However, I have had problems with retaining the original number plate as I cannot find the chassis number. The DVLA have not been helpful one bit and wanted to make it a Q registration. But it is on the road using a Mini registration at the moment because I refuse to make it a Q car." Pictures here.

I understand the car was later fitted with a Vauxhall or Honda engine (please!) although Daniel  said that he would prefer to bring the car back to its original condition with a roof. Until yesterday I didn't know whether that ever happened, but it seems he actually worked on it, now. I was sent over this picture of the car with its Mini registration - and… a roof. However, I also understand that the chap who bought it wants to build up the car as a space framed 4x4. Oh dear... 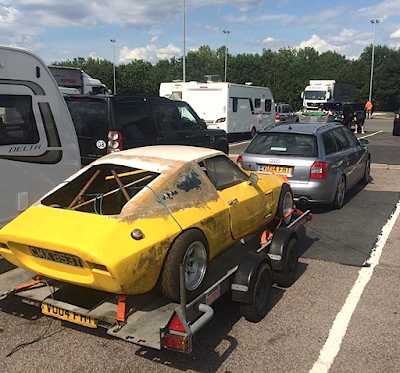