While the Unipower GTs shine at the NEC in Birmingham (click!), an original Mini Beach Car stars at the Epoqu'Auto show in Lyon, France. It has come out of the woodwork after not having been seen in public for ages, and it's a pretty special one, too. This is the car that was seen with a most unusual 'fringe top' on its roof back in the 1960s in Cannes. And some more unusual features: figureheads at the door steps and the boot handle and a white Bakelite telephone, amongst others. It does look very smart, although I couldn't stand noticing that it does seem to miss some more bits. Apart from the strange roof accessoire, the overriders and cornerbars and the gear knob in the shape of a hand that it originally had appear to have gone, too. According to a period article "The owner of the car had the cabin of his motor vessel similarly decorated." 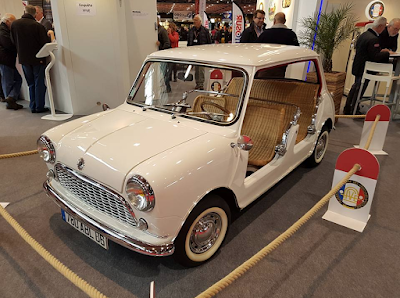 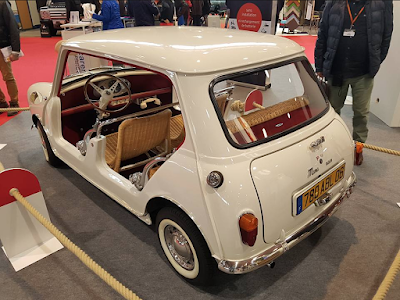 This particular car, one of the 14 made in Longbridge, has some unusual made-to-measure features
Picture courtesy Dominique Sabat 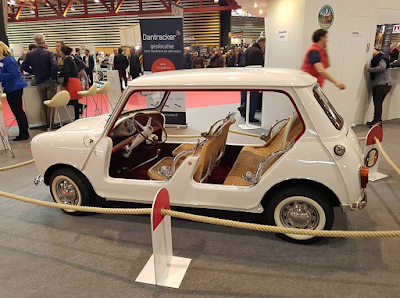 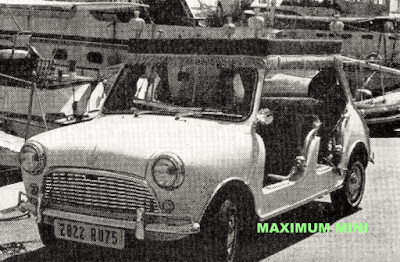 Originally, it was even more lavish, with mauve 'fringe top' and curtains as doors. The car is seen here in Cannes in the 1960s. Note '75' (for Paris) registration
Picture Jeroen Booij archive