Believed to have been photographed at the Earl's Court London Motor Show on the stand of BACO Aluminium in 1963, this is an intriguing one. I was sent the picture by arch-enthusiast Miguel Plano, who asked me: "Could it be Mini based?" I think it could, judging from the wheels and that tall engine space. I'm not so sure about the year though, as it all shouts late 1960s / early 1970s to me. BACO (for British Aluminium Company Ltd.) does not exist anymore, so we cannot ask them. But somebody should surely know more about this car? 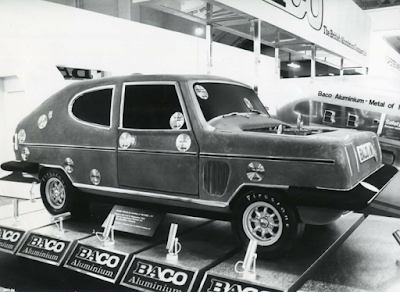 BACO Aluminium built their own car and showed it at Earl's Court. Was it Mini based?
Picture via Miguel Plano