A unique and privately built coachbuilt Mini that was thought lost turns out to survive in the US and is about to make a return to the UK for the International Mini Meeting in August.

The car was built by ex-Stewart & Ardern employee Niall Gilmartin, who'd previously worked on MiniSprints. When Gilmartin started his own body repair shop he thought he could use a mobile advertisement sign to promote his business in 1973. He bought a tatty Mk1 Mini and turned it into this. Gillmartin's original plan was to equip the car with gullwing doors but this proved difficult and thus vinyl clip-on doors were made in a Targa frame. He fitted Triumph 2000 headlights with 1100 indicators under the front bumper. The car's boot was fully closed and rounded, with a Morris Marina sourced flap to hide the petrol filler cap and the number plate moved to bumper height. The rear side windows were placed upside down and roof and c-pillars were trimmed with Vyanide. Originally the car was painted gloss black with blue pin striping. Both the engine as the seats came from an 1100. Gilmartin named the car MG Mini Sedanca with MG badging on the c-pillars.

Now... I only knew the car from an article in Hot Car magazine, but would not have thought it to survive. It does, though, and is currently living in Denver, Colorado! Repainted in red, but furthermore in a beautiful state and very little changed from when it was just finished by Gilmartin, it seems. What's more, the current owner will be bringing it over to the IMM in Bristol. The event's organizers wrote: "We are so grateful to Harry for shipping this beautifully unusual 1963 Mini all the way from Denver, USA to the IMM! You can meet Harry and his Sedanca in our special display tent all weekend!" 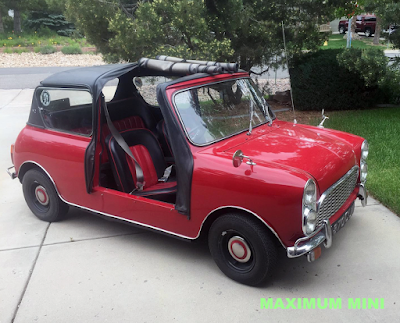 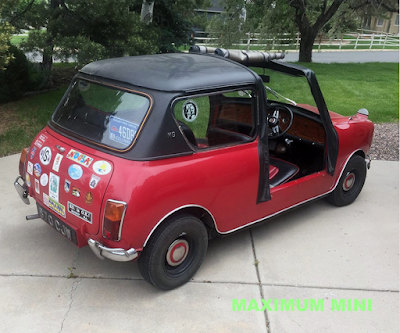 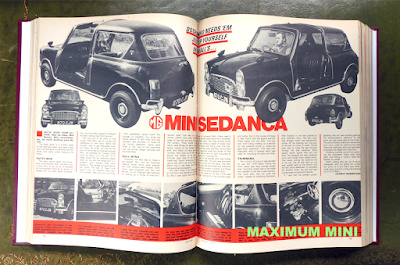