Remember the barn full of Mini derivatives that was sold in auction last year? Well, at least one of them has come in caring hands as I now understand from Lynx Eventer owner Pascal Mathieu of Belgium. He wrote:
"Dear Jeroen, I can’t remember if I informed you that I was the owner of a 6 wheels Hustler (supposedly Huntsman) that was auctioned in UK by Asset Realisation Services in November 2019 with a lot of poor and derelict cars. I’m not far away yet in the process of bring it back on the road; the engine was started and is running, body and interior were cleaned and that’s it for now. Next job will be to check the frame structure and the driving trains. Next on the list is to restore or replace the electrical harness which is a nightmare and after that I’ll check the engine and gearbox and change what will need to be changed. Finally I’ll repair the bonnet (or will mould a new one) and will replace the missing hatch glass. I’m hesitating between making a new one in Perspex (or in Plexi), using a soft material that could be rolled to allow driving with the rear end open as I suppose that in summer when sun will shine in the interior of the Hustler it will be hot as in a greenhouse."

"My Hustler is said to be one of only three factory built Huntsman six-wheelers used for demonstration and homologation purpose, and indeed on the V5 and at the DVLA it is stated that the maker is Hustler, not Mini or any BL make, Rover or another. Having missed one 10 years ago I’m pretty happy I managed to buy this one!" 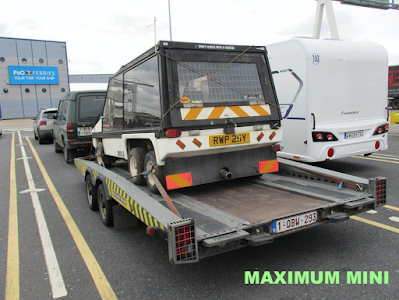 And off it goes! From the UK to Belgium - this Hustler Huntsman six-wheeler will be restored
Picture Pascal Mathieu 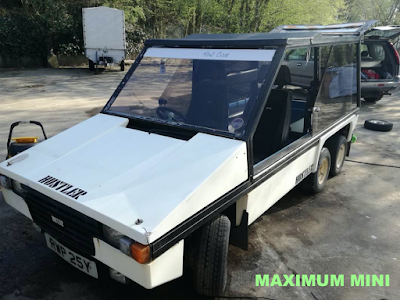 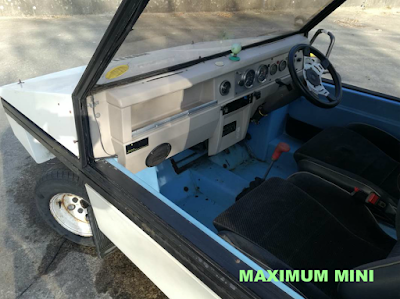 "I suppose that in summer the interior of the Hustler will be hot as in a greenhouse"
Picture Pascal Mathieu
Geplaatst door Maximum Mini op 10:42