Broadspeed GT 2nd demonstrator - where is it now?

The cream coloured and now beautifully restored Broadspeed GT with registration 'EOP 89D' is known as Broadspeed Engineering's demonstrator. The Motor magazine, however, road tested another car back in 1966 and published about it in its August issue of that year. This was 'FOH 500D' and it was a dark coloured car. A second demonstrator? Or just a car that happened to be available at the time? From the report:

"The test car, which we were allowed to keep for all four days, was the highest priced version with a tuned 1,275-cc engine. It attracted considerable interest wherever we took it even within a hundred yards of the Broadspeed establishment, which suggested that there aren't yet many of them about. (...) We did not have the car long enough to put it through our normal acceleration tests on a private circuit, but we managed to time it at 112 mph maximum in top. Power output is about 100 bhp and the compression ratio 10.5 to 1. Twin 1 1/2 SU carburetors are fitted."

Now, pictures of this car are scarce, and I wonder if it survives? A small ad in a later magazine mentions a Broadspeed GT for sale in Coventry. That car was opalescent maroon in colour with a black leather interior and 1275 Cooper 'S' engine. Could it have been the same? 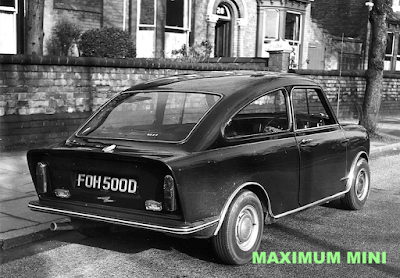 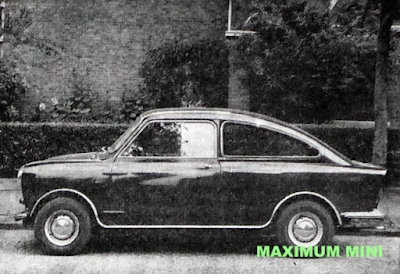 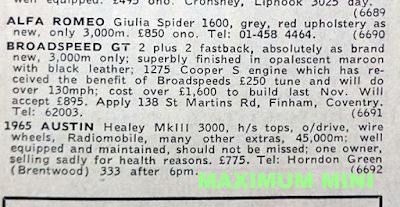 But is it also the same as the one advertised for sale in Coventry for £895 here..?
Picture Jeroen Booij archive
Geplaatst door Maximum Mini op 11:05