The Hrubon Phaeton as well as its later sibling the Schmitt, both made in France, were a sort of Mini Moke but then substantially shorter so that it could be parked head-first in a spot. But there was a six-wheeled 'long' wheelbase version of it, too. I only had one picture of that (registration '286 W 67' well visible) and very little information.

But recently I came across another picture of it. It's a horribly low-quality shot, but at least it does provide some of the much-hoped-for more info. It shows us that the car was dark blue in colour, but what's more: a tiny little side bar with info tells us it was not just available as a four-seater, but also as a Twini! From the text: "Disponible en bi-moteur pour les rallyes debut '82". That is: Available with twin-engines for the 1982 rally season. For heaven's sake - who knows more about that! 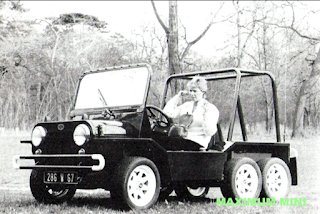 Hrubon Phaeton Six was, as far as I know, only built in a number of one
Picture Jeroen Booij archive 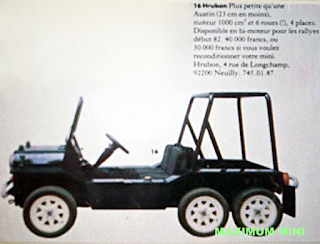