Brooks Mini Special was to become the new Lightburn Zeta

I got in contact with Dennis Brooks of Adelaide, Australia, who's father Samuel built a most interesting and Mini based car in the late 1960s. Dennis wrote: "My father was a fiberglass product engineer at a business called Lightburn's who produced two small Villiers-powered fiberglass cars, one called Zeta and I forget the name of the open two seater sport (it was the Zeta Sports - JB). He particularly hated the Zeta and it was his intention to persuade them to produce something more appealing. He logged 4,000 hours on this project in a shed at home in Adelaide. But Lightburn ceased vehicle production before he finished the project. He entertained the idea of producing a kit car but lost interest. By the mid 1970's he was building large ocean going yachts in New Zealand using a technique called C-Flex sandwich construction, designed by Roberts. He was a skilled fiberglass boat builder in the UK in the 1950's and was head hunted and sponsored to emigrate to Australia in 1959."
Quite a story! And it's surprising at least that the Mini, which Brooks created never got any more attention. Dennis continues: "The car's body was all fiberglass, originally 1965 deluxe 998 steel chassis between the sub frames. It had a longer nose and longer tail, with 11 inches extra length overall, wind up windows and a one inch shorter windscreen from a Morris Minor 1000, Volkswagen rear quarter windows, stock rear window and 1100-esque fold down boot and tail lights. Compared to the standard Mini 100 kg weight was saved."
So what happened to it? Dennis: "It was built in 1968 and finished in '69 and is seen at the Mini dealer (Boniley's Motor Center, South Australia) on these pictures where it was to get the suspension charged. I acquired it in 1974 from my father who built it and it was the first of four Minis I owned. I sold it in '76 and it ended up in New Zealand. Don't know where it is now. I wish I still had pics of it as finished!"
And he had another little surprise: "Don' know if your interested but I have a photo of another car made by Samuel. A Morris minor 100 utility converted to a five seat wagon. Sam converted 3 Morris utes, this was our family car when I was about 4yrs old, 60 years ago now. Enjoy. Regards, Dennis"
Love it! Now, is there anyone who would know more about Samuel Brooks' Mini Special. Could it still be somewhere in New Zealand? 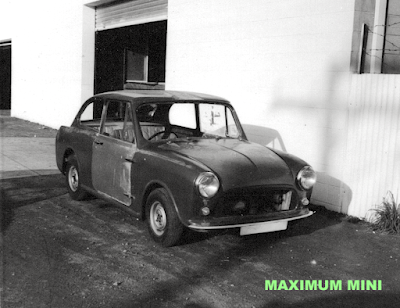 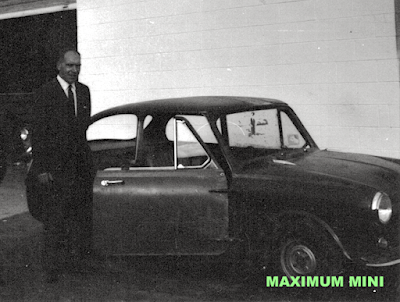 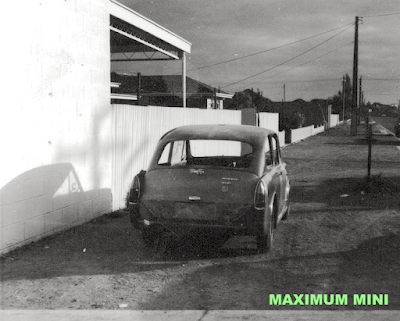 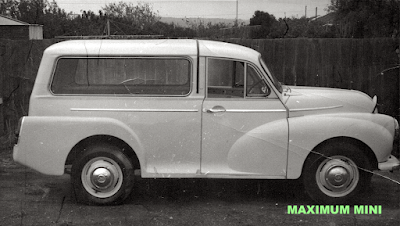