Let's stay in Italy for another while after our Targa Florio exploits. Lovely food and wine, nice folk and some great cars there. Hang on, forget the obvious stuff from Modena and Maranello, I'm talking Mini derivatives here. What else? And the Minimach certainly is not on its own. How about some sunny Mini based beach cars from Italy? They're different from the English ones. And just three of these were built on Innocenti Mini base by a coach builder named ORO. They were given the name 'Mini Mare' and at least one is known to have ended up as a tender to the private yacht of Mister Ferdinando Innocenti himself. All three cars were said to be similar with wood surrounds plus wicker work seats, boot, grille and bumpers although they came in different colours: white and ivory. One of the three cars was also said to have been forlorn in a fire but that now seems to be untrue as pictures of a third car were made by Francesco Marziali of Florence, Italy recently. And with bright orange paint and an unusual spot light at the roof that third Mini Mare is least as striking as the other two. First of the Mini Mares was owned by Ferdinando Innocenti. Picture: Mark Zerafa 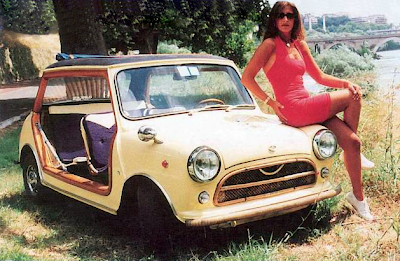 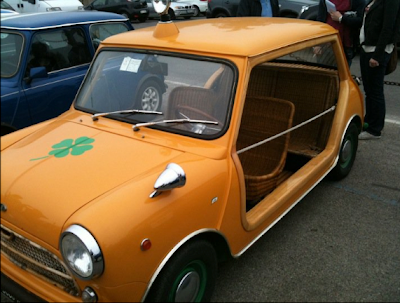