You may remember this post about me wondering about the Ogle SX1000 that was featured in my book. Well, the car is alive and well in London, as I understand from it's current owner, Richard Gauntlett, who wrote a nice little update: "Dear Jeroen, I love your book and have a copy sitting proudly on the shelf at home! I just found your blog and I saw a post about my car and I thought I would update you. I bought the car from Geoff about 6 years ago and have used it very little sadly. (mostly in London). The car was invited to join the 50th anniversary parade at Goodwood Revival in 2009 and was driven on one of the days by Sir John Whitmore who was a director of the company as you know. It was the first time he had driven an Ogle since 1963 and he was full of stories which was most entertaining. I had a great weekend at Goodwood and had the most wonderful drive back to London, overtaking everything I could and drove my lovely little car to the limit with a huge smile on my face because a great friend of mine was following in my new 745 BMW and he confessed to me later that he was working very hard to keep up with me!"
"My little collection has been growing and in central London it is very difficult to find the time and space for many cars so my friend Graeme Hunt stored the car in his showroom for a couple of months and I told him that if someone was really interested then I might sell her. The Ogle is currently in London and still very much in my possession. I must confess that sadly she only gets driven a few times per year but the reaction in London is huge! Lots of smiling faces wherever we go." I am not surprised! Thank you Richard. 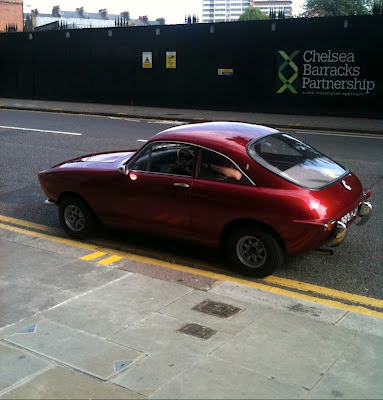 Ogle SX1000 is perfect for zipping around town, but mind those double yellow lines