Yet another Mini Beach car variant!

You must have noticed that an awful lot has been written and said about the Mini Beach car lately. Not in the last place because the prototype was found in a scrap yard in Greece a while ago (exiting story here and here). The daunting restoration of that car will actually be finished one of these days, so keep an eye on these pages. But I'm sure you will agree it was least as nice to find out that Mini Beach cars weren't limited to the not-too-sunny UK. There was an Italian Innocenti based variant, too. And again you could read all about these cars here (click!), including the discovery of a fourth example of this rare car in the USA (here). I hope I do not over exite you with these findings.

Hold on, 'cause were not there yet. Now that Summer is approaching it is about time to unveil a third variant of the Mini Beach Car. Not from Longbridge, not from Milan, this time it comes from... Spain. Oh yes. Over there in Gavà - right on the Catalan coast and just miles from Barcelona - a coachbuilding company named Arco Iris Autos built it. Reader Xavi Enrich, who lives in Catalunya himself, made me aware of one such car when it was offered for sale a couple of months ago. He says he knew of another purple coloured example that had been on display in the show room of a Barcelona driving school for years, too. It seems that the one shown here at least was based on an Authi Mini 1000, built in Pamplona, Spain. But apart from that Spanish base, the conversion too is very different from its British and Italian siblings. There's a roll bar rather then a roof, there's no wicker inside and the door openings are round and have been welded shut with wide metal strips. They do have ropes to keep passengers from falling out, though, archetypical for a Beach car. Crude you say? According to Xavi the finish was actually very good.

Oh, it is said to have been built in 1975. Would I like to learn more about these Spanish Beach cars? Of course I would. Now, vamos a la playa! 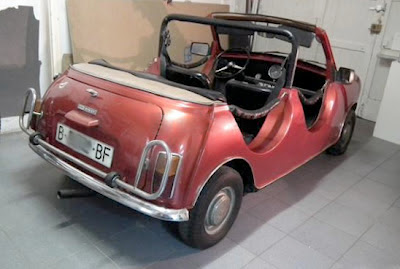 Spanish built Beach car is based on Authi Mini, made under BMC's licence in Spain
Picture courtesy www.segundamano.es 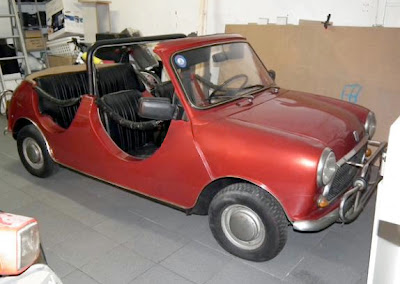 Round door openings, a roll bar and signature rope to keep passengers in. But no wicker
Picture courtesy www.segundamano.es