There still are a few mysteries to be unraveled around the Broadspeed GT: the pretty fast back Mini GT that was built by Ralph Broad. It is believed Broad built 28 between 1966 and 1968 but survivors are rarely seen. For 'Maximum Mini' I photographed one in Japan, and I have only seen two others.

Broad, who passed away in september, is said to have had more orders for the GT, but when his racing team switched from Minis to Escorts, BMC was not amused and immediately stopped the colaboration, killing off the pretty fast back.


Now, of the 28 GT’s built quite a few were reputedly exported to Spain. According to one trustworthty source: "Most of the built cars went to Spain, where a Barcelona distributor had created a keen market." I have heard the figure of 16 several times but, strangely, have never heard of a single Broadspeed GT surviving in Spain.

I did find a few advertisements in 1967 Spanish newspapers where a company named 'Automovile Nadal' of Mallorca and another named 'Auto Paris' sold them. Their spelling is rather corny; one calls the car 'Broaspeed'; the other 'Broatepeet'! 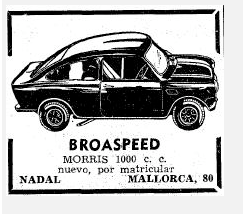