Of all the Mini derivatives, the Mini Marcos might just be the best known. Often tagged one of world's uglier cars it never the less found plenty of takers, and over the last four decades more then 1500 were sold.

However, one Mini Marcos is rarer then the other and with 143 built the Mk1, from the earliest day of the Mini Marcos long life, definitely is the rarest of them all. It doesn't happen too often then that these cars are found, but Mini Marcos fan Gert-Jan Westerveld of The Netherlands just did so. He knew of the car that was raced by Dutch 'ART' (Algemeen Racing Team) in the late sixties and early seventies at the Zandvoort track but was told the car probably didn't survive. However, when he happened to come across a Dutch registration number for a Mk1, it triggered a search. 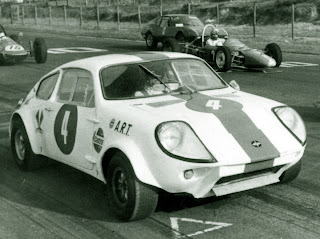 The car it eventually lead to turned out to be the ART car. Apart from a new paint job in eclectic blue (originally it had been white with a signature green stripe) the baby Marcos appears to be in a remarkably original state. According to Westerveld its original engine with period Arden 8-port head and double 45 Webers is still there. Also the dashboard and home made rollbar survive, as do the 1969 homologation papers.
Back in its early days the car was raced by an enthusiast named Hans Castelijn. It seems that he did not road register it untill 1972, by which time the ART was dissolved. Two years later the Marcos' registration was sorn while Castelijn passed away more recently. What happened to the car in between these two periods is still somehat unclear but Westerveld hopes to brighten that up in the near future too. We might just see it back on the Zandvoort track in that same near future... 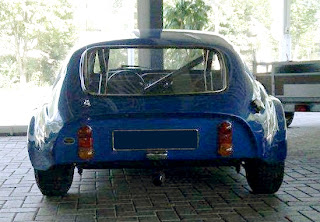