Whatever happened to Bufi Mowog?

I love magazines. Motoring magazines. Old motoring magazines, and have far too many.
Hot Car is a favourite publication as it wrote a lot about unusual and DIY-built stuff of the sixties and seventies, when wrecked Minis were cheaper then chips.

One of the more obscure cars that made it to the hallowed pages of that mag was a mean looking Mini derivative with the incredible name 'Bufi Mowog' that came with twin engines and was meant to terrorize autocross. In fact it even made it to the October 1968 cover of the mag under the telling heading 'Twin-engine Terror'. According to Hot Car the mean looking chariot was built in three years time in Barnt Green near Birmingham by "Rally Champion Tony Fisher and Dave Butterworth. 'Fi' for Fisher, 'Bu' for Butterworth and Mowog for all those BMC parts."

The four wheel driven car was powered by a 1071 Cooper S engine from "a works prepared Alpine rally car" at the front and a blown 1100 with automatic transmission at the rear. It must have been a pretty scary machine to drive but reputedly it did dominate the Nationbal Autocross championship during the season.
The strange thing is that it never reappeared after its Hot Car claim to fame. Was it wrecked? Could well be. But it could just as well have been driven into a shed after its late sixties autocross victories.

Could Barnt Green still be hiding its outlandish automotive secret? 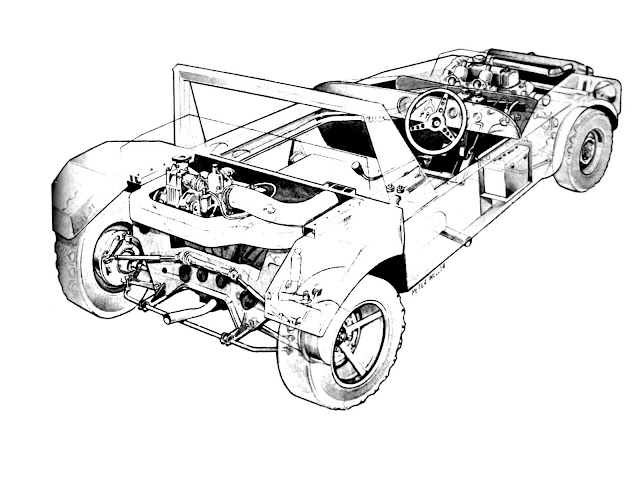