Campy science-fiction fans must go mad for Doppelgänger; a 1969 British SF-flick that may be better known as 'Journey to the Far Side of the Sun' to our American friends. Or it may not. Click for the incredibly corny trailer here to see what I mean.

It's all about a hidden planet, a space ship, a hero and a villain. Nothing new there.
What makes it interesting though is that a couple of most unusual vehicles were made for the movie in the UK by a company that was aptly named Space Models. Two of these cars came with six wheels, had ever so futuristic looking wraparound wind screens and were based on, oh yes, the Mini Moke. 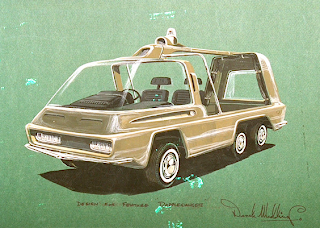 Some years later the cars were slightly modified, painted blue and used for more science-fiction fun as they appeared in the television series UFO too. By now they were given a name too: SHADO Jeeps, and from what I understand is that these space oddities survive.
I'd love to see them in real! 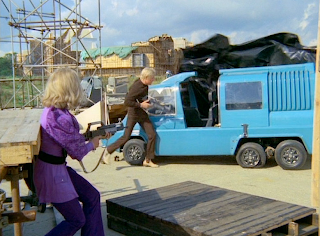 UPDATE 2 may 2012. Andy V. wrote: "Just read your piece about the Doppelganger / Shado movie Mokes - the signature on the original artwork is that of the late Derek Meddings, who produced other, more famous movie cars - most notably FAB 1, the pink, six-wheeled Rolls-Royce from Thunderbirds and also James Bond's Lotus Esprit submarine car from the 007 picture 'the Spy Who Loved Me'. I look forward to an update on the 'other' Prisoner Moke."
Geplaatst door Maximum Mini op 15:34