Earlier this year I went over to Kent to meet up with Bob Egginton. Bob is a nice bloke who built all sorts of vehicles from the 1970's on, most of them race bred. But I was mainly interested in his two 1980's Mini based exploits: the Hobo and the Minim. The first appeared to have been documented fairly well and when Bob took me to an old mate for lunch who'd appeared to have kept a Hobo in his garage for decades, he made my day.

However, the Minim seems to be more mysterious. Bob never kept any records but thinks he made six. He now sends me a stack of pictures every now and then when he comes across some more while cleaning out old drawers. Great stuff.

It does make me wonder what happened to these Minims. I have never seen one and never came across pictures other then the ones used for publicity in the eighties.
Before I met up with Bob there was an unfinished Minim for sale though, but I have no idea what happened to that car. It would be nice to catch up with its new owner. 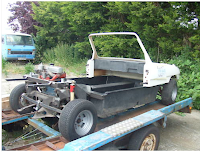 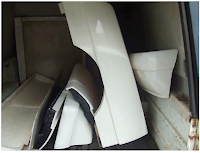