Yesterday I wrote about another Ogle SX1000 for sale and coincidentally I received post that same day from Ogle's ex-boss Tom Karen, who ran Ogle Design for 37 years and in that period designed all sorts of vehicles from the Reliant Scimitar to the Raleigh Chopper bike.

In fact, he has taken up the idea of clustering some of his stories into a book and did just so in 'Ogle & The Bug'. It isn't a real book, more a booklet, but the style is great as it must be a Karen design too. Simple and a bit cheaky.

There is not much information on the Ogle SX1000 or the earlier SX250 (the SX1000 was the last car that David Ogle designed himself before he got killed in one in a traffic accident), but there is some fascinating other stuff. I especially like the stories about Karen's early days in England when he started modifying his first car - a £50 Austin 7 that he gave a rather crude but intriguing new body, and a three-wheeler called the Vimp "A corny combination of Imp and Vamp". Cool is also the new three-wheeler Karen is working on, Christened STS, for 'Smarter then Smart' - you'll have to admit the man is good in making up catchy names.

There are only 47 pages, and the majority of them is dedicated to the Bond Bug that Karen calls 'My pet project', still then it's a steal at only £5.99 plus postage. Buy it directly from the man himself here 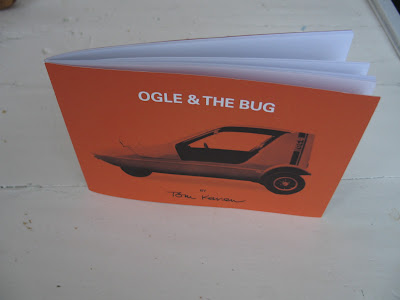