We are nearing the end of the Camber/Maya files series, as I am running out of information on known cars, although I have a few surprises left. Anyway: information on some of the Camber and Maya GTs was brief but in some cases these articles lead to previous owners or even current owners of cars that I thought could have been scrapped. Have a look in the files by clicking here to see what I wrote and found out about in the last few months. Other cars have been very thoroughly described over a period, which helped the research, and the car that is featured here is definitely one that fits that bill.

And there's a good reason for that as its owner in the 1970s was no one less than the one and only true kit car guru mister Peter Filby. In the many, many, magazines that he published in the period the 'Maya Maynot', as it soon became known, was a regular topic and it can be seen in the background on pictures in other articles too. Originally the car came with 850cc engine "which expired rather suddenly at an unmentionable speed, so Caroline, and her boyfriend Peter Filby, decided to drop in something a little more healthy like a 998 Cooper lump", wrote Hot Car magazine in 1975. At around that time the headlights were changed to rectangular units from Hillman's Avenger, a job that was carried out by the Lenham Motor Co. Also the colour was changed to 'Tinned Salmon' with a black stripe plus a front spoiler was fitted, while later pictures show it with a rather amazing rear spoiler in Can Am style, too!

The car was used on a daily basis, which did not do much good, and a couple of years later it was decided to refurbish it somewhat more thoroughly as "the general air of dilapidation was not helped by the rather unusual styling, which although bizarre at first, does tend to grow on one", wrote Filby. A series in Alternative Car magazine followed. The engine, brakes and steering were rebuilt, starter engine, fuel pump and dampers were replaced, the doors were fitted with new hinges and interior panels, and the body work around these was strengthened. A new rear window and new windscreen rubbers were fitted, sound proofing, rubber mats and new seats were ordered and the car was repainted in Ford Olympic Blue. It cost some 55 hours and 550 pounds (material only) to do the job. Some issues later, the car was advertised for sale in the magazine for 750 pounds only, which seemed a bargain. Where did it go? It appears to have been on the road for the last time in 1983.

UPDATE 24 May 2017: the car survives and is beautifully restored in Japan. Click here. 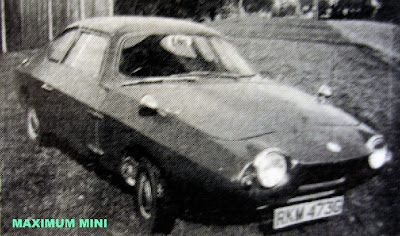 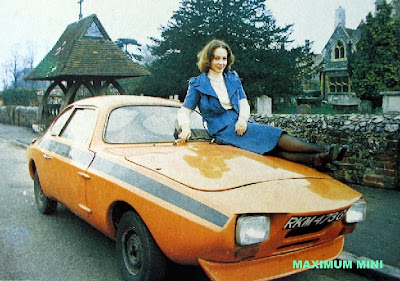 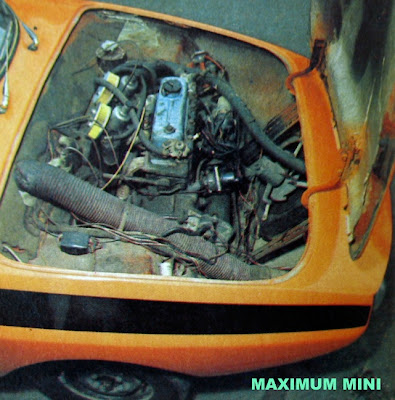 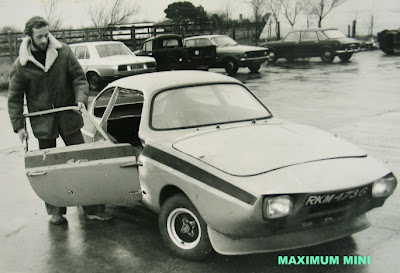 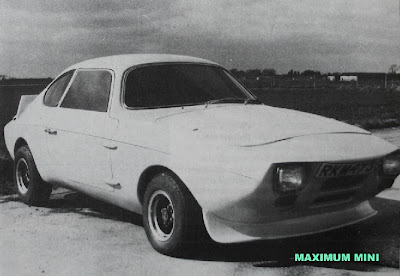 This is what became of it at the time. Colour is Ford Olympic blue here
Picture courtesy Alternative Car magazine 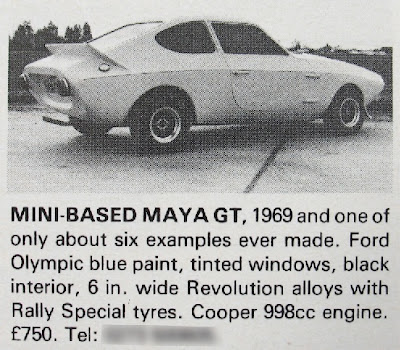