Look at that! It's a rare picture of the Broadspeed GTS in action. The only works race car based on a Broadspeed GT made it over to The Netherlands in the late 1960s where it was raced by Tonio Hildebrand, a bit of a charachter in both society and motor sports circles (more here). Hildebrand raced it in Dutch events and in every picture I have seen of it, it appears to have underwent a colour change! This recently unearthed picture was taken by Hans Hugenholtz at the Welschap track - an airfield course that was used only from 1969 to 1971. The car was sold twice more after Hildebrand's ownership, after which it languished for decades in Amsterdam, very close to my home. When I tipped off a Broadspeed fan about its whereabouts in 2007, he immediately went over to collect it. 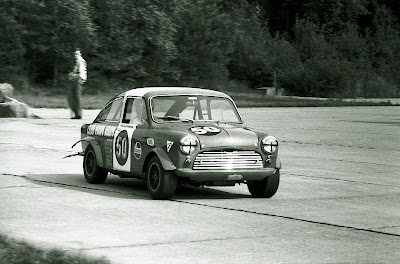 Email ThisBlogThis!Share to TwitterShare to FacebookShare to Pinterest
Labels: Broadspeed GT, The Netherlands