Thanks to dr. Greg Mills of South Africa I can share another great story about a unique Mini derivative. In this case it's the Mead Special: a one off race car, designed and built by Ron Mead in South Africa in 1970. The story was written and sent to me some years ago by Mills, who currently owns the car and is working on its restoration for quite a few years now. I have shortened it considerably but hope you will enjoy it as much as I did. Naturally any additional information on the car is more then welcome.

"I first met Ron Mead, then 74, in 1983 when trying to find ways to make my Mini go faster and stop at all on a limited student (i.e. non-existent) budget. I had been referred to him by various Mini fundis who saw him as the font of all tuning knowledge. I was not disappointed. His garage in Table View in Cape Town was an Aladdin’s Cave of Mini bits-and-pieces – eight-port heads and straight cut gearboxes – and included his beloved Mini based special. He helped me out then in the same way as he had been kindly to many others: I went away armed not only with good advice on how to make my car go faster, but more importantly in his opinion, with two Minifin brake drums purchased for the costly sum of two Rand to attempt to make it stop."

"I made a point of calling him up on my return to South Africa in 1990 after a five-year study absence, and was saddened to be informed of his passing. After some detective work, that year I managed to locate his Special in a township backyard, which had been stripped of its stroked-and-bored 1500cc engine and other ‘trick’ bits, and borrowed the money to preserve what I instinctively thought was a slice of motorsport history. My hunch proved correct as I found out more about its constructor." 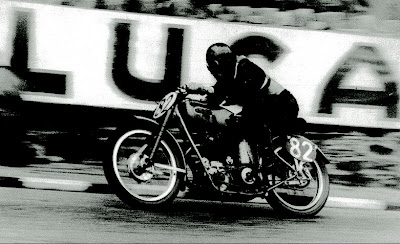 Ron Mead on one of his racing bikes. He got involved in Minis later in SA
Picture courtesy Greg Mills

"Ron Mead is regarded as one of the great privateers in the Isle of Man TT, finishing third in the lightweight event in 1950 on one of his self-built KTT Velocette and Manx Norton based 250cc specials. a gifted rider/engineer from Crewe in Cheshire, Mead was not only an ace-tuner but no mean rider, finishing third in the World Championship as a privateer in 1949 with a fourth in both the Lightweight TT and third in the Ulster GP. During the war years, Mead worked in the Rolls-Royce aero-engine department in a ‘reserved occupation’. After his own competitive motorcyling career ended, he joined Cyril Kieft as a tuner, the steel industrialist having turned his attention in motorsport initially to manufacturing 500cc single-seaters for, among others, Don Parker and Stirling Moss."

"Mead emigrated to South Africa in 1966 leaving his job at Tecalamit in Plymouth, where he worked on the design of fuel injection systems, to do so. He took up employment at BMC, later Leyland, in Blackheath, working mainly on the engine development side. But his then home in Rugby soon became a Mecca for Mini aficionados, and Mead found the time to prepare engines for Andre du Plooy’s indecently fast Cooper S in Killarney’s Argus Modified Production Car Series. It was during this time that he started building his sportscar Special, a glassfibre-bodied spaceframe employing Mini front uprights on all four corners, with inboard front brakes driven off Mini automatic driveshafts. The engine was housed on a Mini front subframe placed at the rear of the car. With plans both to race the Special and drive it on the road, he had managed to test it at Killarney before ill-health intervened. Hopefully his Special will once again be seen on South African race-tracks, a small slice of the motorsport legacy of a selfless and largely unheralded engineering talent."

UPDATE 9 April 2020: Still under restoration but now in the hands of a new owner. Full story here. 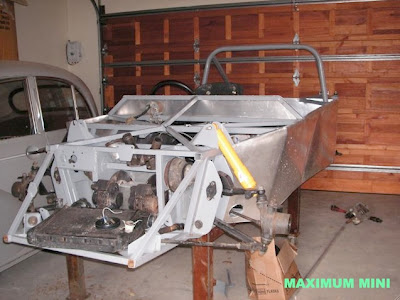