The Phoenix of last week's Mystery Mini Derivative is not the only Mini based car emerging from BP's 1974 Buildacar contest. In fact, the winning entry was based on a Mini, too. And Jon Barber sent me a link of the vehicle in question in motion! See it here. The thing was built by the boys of Cranleigh public school, came with five doors and 60 cubic feet of luggage space, or four seats with masses of leg room. A Mini Van found in a scrap yard provided subframes and suspension plus shortened and narrowed roof. The engine, however, came from a 2CV and was placed under the front seats. Thanks Jon!

But apart from the Cranleigh entry and the Phoenix, there were several more Mini based creatures, or so I found out. Langtree Comprehensive school came over with an aluminium bodied and boxy shaped Mini based thingy; William Temple School had a Postman Pat-like Van with four-wheel steering and, again, Mini power and then there was a Mini-based contraption using a much altered and ultra wide Messerschmitt body and chassis! The boys who built the cars must be in their early fifties now. Where are they? And who has more information about the contest and the unusual vehicles it gave birth to? 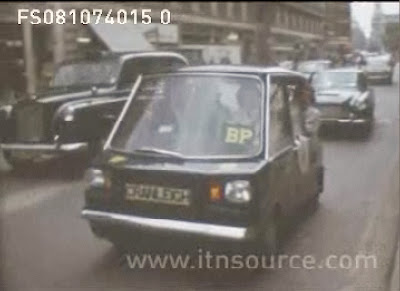