The poll for the Best Mini derivative found in 2011 is now closed and with 38% of the votes, the 'time warp' Cox GTM that resurfaced earlier this year in Cheshire and sold in May (see here), won. Tim Whight is it's lucky new owner who is currently restoring the car. I asked him what his plans with the car are and this is what he said: " Of course, I bought the car off eBay, totally knowing nothing about these cars, but wanting a Mini engined variant and especially an early GTM with the Cortina back lights. So this car was for me. At the time of when the auction was ending I didn't have any free time to go up north and pick it up as was off to the IMM in Switzerland, so asked my very good friend who didn't live far away to collect for me and keep it at his untill I got back from Switzerland, then me and my dad went to pick up the car."

"It's now at my place half stripped in the queue of cars to be restored. Hopefully it will get to our unit soon where myself and my brother can start work on her. The plan is to get a 1071 engine of a friend of mine and slightly tune the engine. At the minute I have collected a lot of Alexander 60's tuning parts so I was going down that route, but I also have a few Downton tuning bits and so I am stuck with which exact route to go down. But I know there will be no major modifications to the whole car. The plan is to keep it pretty much as it is in the pictures on your site: a plain straight 60s colour with no shiny wheels, and everything to be period of the time!" An excellent choice, I would say. For the poll results: second place was for the CJC Bison, a.k.a. the Lamborghini Mini (24% of the votes), third for the lost Prisoner Moke (19%), fourth for the Innocenti Mini Mare (13%) and fifth for the converted Camber GT (6%). 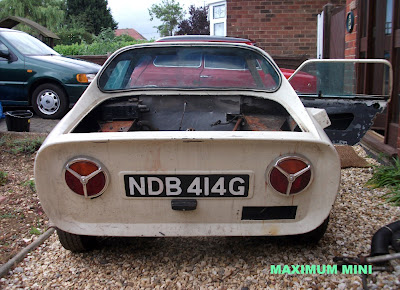 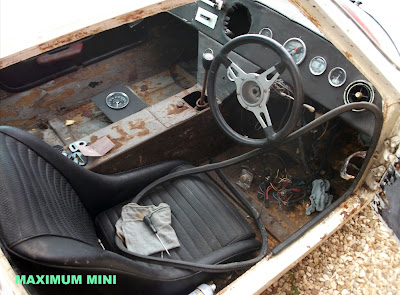 Interior, too, is as it can be found in Cox' brochures. That will be retained 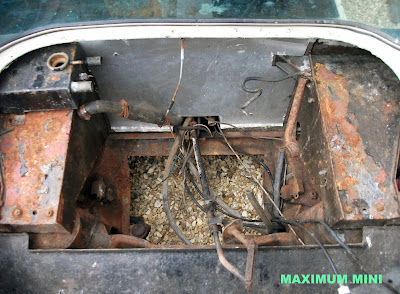 A 1071 engine with some Alexander or Downton bits may be fitted here soon
Geplaatst door Maximum Mini op 10:00

Email ThisBlogThis!Share to TwitterShare to FacebookShare to Pinterest
Labels: Cox GTM, Find of the Year