I don't know why, but Mini Jems - as well as Mini Marcoses - are proving to be very popular in France. According to Enguerrand Lecesne just one Mini Jem (a rare Mk1) was sold originally to a Frenchman and it is the car you see below. From 1970-on that green little thing was hill climbed and auto tested regularly in eastern France and Luxembourg by owner Pierre Tollini. I do not know what happened to it, but perhaps somebody else does.

It's most certainly not the Mk1 that was snapped up a while ago in France by Milco Colsen. Unfortunately this Mini Jem was at one stage equiped with a much later Mini Marcos rear door and a 'frenched' petrol tank funnel. Milco says he thought about changing this to the original closed rear again, but in the end didn't do it, and has now decided to sell the car as a project (ad here). Despite having no paperwork with it Milco and I found out that the car was originally British registered on 1 November 1968 and used to be red. Milco now hopes to get the original registration back on the car. 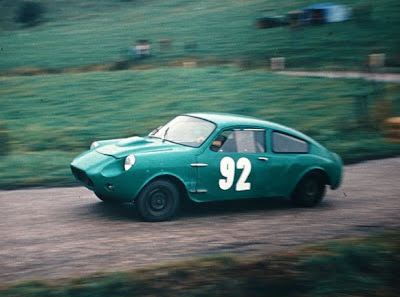 Pierre Tollini and his faithfull Mini Jem Mk1, which he raced in France in 1970
Picture through Enguerrand Lecesne