We know the original MiniSprint by Neville Trickett and all its sibblings: the later Walker GTR; the Stewart and Ardern MiniSprint; the Speedwell Mini Sprint (one for sale here) to even the Trickett Sprint conversion that's available to this day. Crikey. And then there were all those home-chopped conversions, too, some good, some very bad. Last but not least there's the MiniSprint Traveller. A bit of a practical joke by Neville Trickett and Rob Walker, I always assumed. Not so, as I found out now. Pete Flanagan sent me a copy of an advertisement for that car, showing it was properly marketed by Walker and Co in 1967 (economical and inexpensive!). Only one is said to have been made though, but they are becoming sort of trendy today (click!) 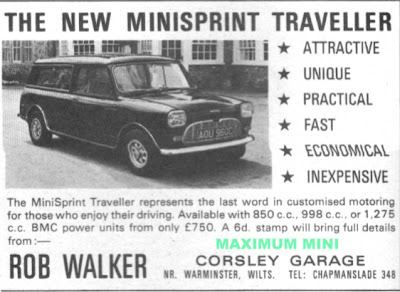 There it is again, showing off its size next to an ordinary Mini Traveller
Picture via Pete Flanagan

Email ThisBlogThis!Share to TwitterShare to FacebookShare to Pinterest
Labels: MiniSprint