According to my weblog's statistics this entry is the most popular article ever. It makes you wonder about the popularity of the Broadspeed GT and the kind of interest a replica would attract nowadays. Every now and then I receive a message of somebody asking if replicas are still available, but I have to disappoint them as the plans are not yet concrete. However, now a beatifully recreated Broadspeed GT has come to the market. It is the car owned by Bernie Hines in Tauranga, New Zealand, which uses a 'Downton GT' roof conversion as offered for sale in the mid 1990s in the UK. In fact it replicates one particular car: the GTS racer of Laurie Stewart that was built from a Broadspeed GT built under licence in Australia by Brian Foley. The actual car still exists, too, and is owned by Jono Morris nowadays (see here).

Fortunately Bernie is not mysterious about the car's whereabouts. The ad says: This is a replica of Laurie Stewart's Broadspeed Mini raced in 1966/67. The car was built using a mould taken off an original Broadspeed mini in the UK. The engine is a 1380cc fitted with a 7 port AKM crossflow head producing 140 hp. Straight cut drop gears and Jack Knight 4-speed dog box plus LSD diff. The asking price of 25,000 Australian dollars (about 16,000 GBP) is in my opinion not so strange a price for this lovingly built car. Reader Tim Neal wrote: "The price of this car reflects the sum value of the parts. Bernie is meticulous in the building of his cars and this one is mechanically 100%++ in terms of reliability and performance. I've known him for many years and have seen him drive this car against others which on paper should be faster around the circuits of NZ, yet due to his skills as a builder and driver he has left them begging at the back of the grid..." See the ad here. 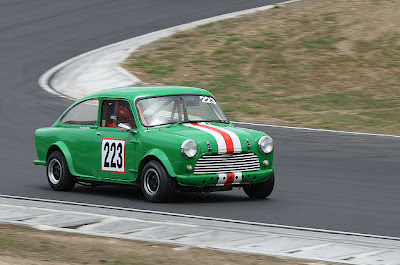 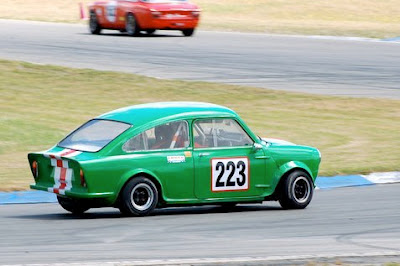 The car replicates one of Australia's best known Mini racers that ruled the tracks in '66 and '67
Picture courtesy flickr.com