Just when you think you've seen all the amazing discoveries of this year, a bunch of rare coachbuilt Minis turn up in southern Europe. In the first place there's a Wood & Pickett Mini Margrave that's been given the full treatment. Forget about the Mercedes-Benz grille, turning it into a caricature of itself if I may say, but this is one desirable car. It looks to be a sister car to '50 MAR', that was built for one sheik Omar and which is often considered to be the ultimate in W&P conversions. This car, registered '111 UN' in 1973 (on sorn since 1999), turns out to live in a Monte Carlo underground garage. And recently somebody spotted it with his videocamera. See the video here.
UPDATE 22 December 2012: more pictures and insights here 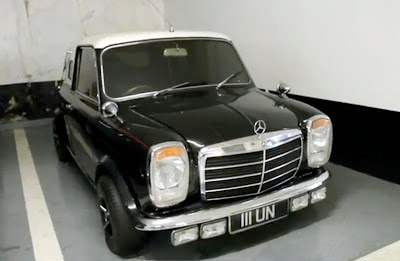 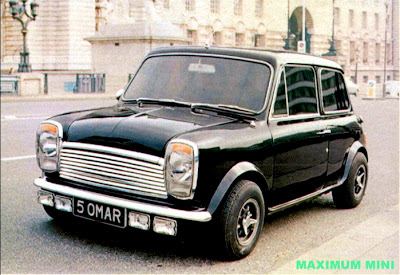 Also from Monte Carlo, some pictures have arrived here of a white beach car with a red interior and unusual chrome figure heads on the sides. The car is left hand driven and comes with a telephone in white bakelite and white wall tires - very groovy indeed. There's also a picture of the same car, shot in Cannes in 1967, where it comes with a canopy roof with more chrome ornaments and a Paris registration. But perhaps the canopy was simply put on top of the roof, who will tell? I understand it is currently owned by a man from Switzerland who lives (part time) in Monaco. I'd be delighted to get in touch. 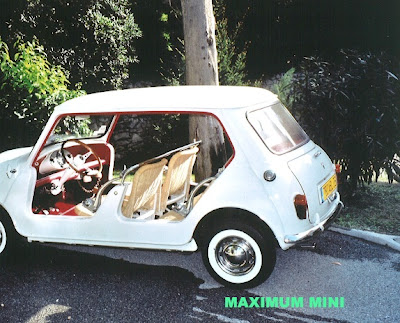 This beach car has turned up in Monaco, too. It was formerly registered in Paris
Picture Jeroen Booij archive

Last but not least there's what appears to be one very original Crayford 'Mini Sprint' convertible in Barcelona. It's based on an 1967 Austin Cooper, also left hand drive, 'BRG' in colour and with hydrolastic suspension and 998 engine. It's also... for sale! 24.000 Euros will buy you this very cool Christmas present. Click here for the ad. Oh, speaking about Christmas - don't forget to vote for the best find of 2012 (here in right hand column). On Monday I will bring you the traditional Christmas puzzle. For now: enjoy the weekend! 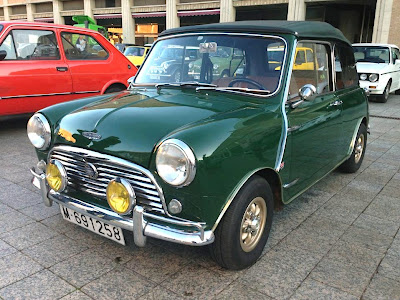 Austin Cooper based Crayford has all the period bits it should have and... is for sale
Picture via Ivan Classics
Geplaatst door Maximum Mini op 10:20