Don't think I ever tire of writing about Deep Sandersons. Actually former DS 301 prototype owner Guy Loveridge brought up an interesting issue after this post. He wrote: "Ref Deepy Prototype - Chris Lawrence always said it was primrose yellow, but I have a colour version of the car in the snow and it is pale speedwell blue, which concurs with Len Bridge's memory of it."

Meanwhile I looked up the colour issue in Chris Lawrence's biography. He wrote, back in 2008: "It was all finished and painted in time for the racing car show in January 1962, where it was nicely received by the public, and more or less ignored by the press. It was painted pale primrose yellow, which we correctly thought would look good under artificial lighting, and with its registration number 2ARX is was really smart."
After a couple of days Guy came back with the picture dug out from his old computer drive, saying: "There you go. Taken on a box-brownie, just before going into Olympia for the Racing Car show." Was that Speedwell Blue? It could be, but it could well be off-white, too. Guy said: "It could, although others who were there, Doug Blaine and Len Bridge, remember it going to the show in Speedwell Blue. My Dad went as a young man - 23 and was sure it was blue as well... his favourite colour..."
Judging from the picture provided by Guy - what do you think? 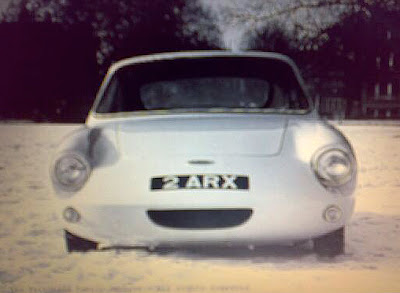 It's a colour picture of the Deep Sanderson 301 prototype. But what colour was it?
Picture courtesy Guy Loveridge 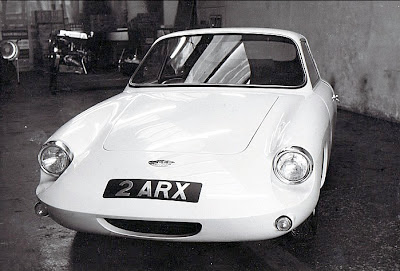 There are plenty of B&W shots of the car. This one was taken inside Lawrence's work shop
Picture Jeroen Booij archive