Back in the 1960s the highlight in darkest January used to be the Racing Car Show in London. If I'd ever be able to time-travel, this would be the place to go for me. Many Mini derivatives were introduced here, and I'm sure quite a few were sold there, too, in the Royal Horticultural Hall and later Olympia Hall with their signature parquet floorings. Over the years I have amasssed quite a few pictures of interesting cars taken at the show and wonder if a series of aricles would be appealing to you. Perhaps there are also readers out here who like to share their Racing Car Show pictures? Let me know. 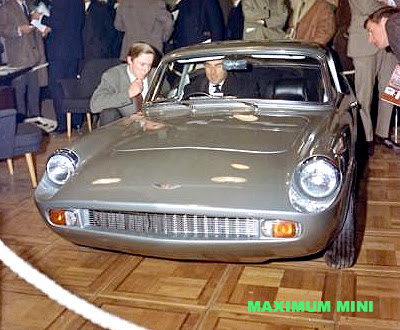 "It does suit you doesn't it, Sir?" A Unipower GT at the Racing Car Show
Picture via Keith Johnson
Geplaatst door Maximum Mini op 14:00