There have been several attempts to build a Lotus 7-type car with Mini motorisation. The Status Minipower, designed by an ex-Lotus engineer, and the Australian Nota Fang may spring to mind, although these were of course both rear wheel driven. So how about this one? All I know is that it is supposedly called the 'Christopher Mini'. I looked up the registration 'UEL 175J', and that told me it is based on a 1970 Morris Mini 1000; is blue in colour and... is still on the road, too. But that where the track ends. I wonder if it is on its own, as it looks to be built well. Thanks to Peter Camping for sending in the picture!

UPDATE 25 January 2012. I have mistakenly mentioned Roald Rakers as the source for this picture - that should be Peter Camping. Luckily Peter knew a bit more about it, too. He wrote: "I do not know its exact name, but the car was built by Mike Christopher. The picture came from Kitcars International magazine in February 1992. Then-editor Ian Hyne wrote: "The editor paid a quick visit to the Bristol show back in November and among the various exhibits, (...) there was a car entered in the auction that is worthy of mention. A quirkily styled machine built on Mini mechanics, it was in fact designed and built by Mike Christopher, son of Ray Christopher of Poole based GT Developments, manufacturers of the GTD 40 and T70 replicas. The car has a tubular spaceframe chassis and a 20 gauge mild steel body and standard Mini mechanics. We don’t know who bought it or even if it is sold but if it did, the new
owner might be interested to know a little more about it." Well, that's a lot more then we did know, isn't it? Time to get in touch with the Christophers. And appologies to Peter again! 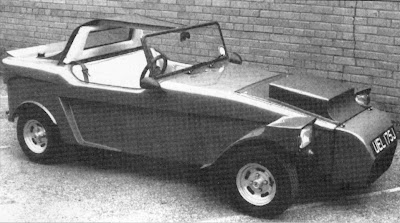