The Maximum Mini forum is online for a week or two now, and although it's not yet blossoming, some interesting posts have appeared since. One that I particularly liked came in yesterday from Tim Raven. Tim wrote: "I'm nearly sixty years old, so I've lived through the halcyon days of Mini based kit cars. My father was a car enthusiast, although kit cars didn't excite him, even though he loved Mini's, I have a few memories that might interest."

"One day after school, my father took me to the then very famous Connaught Cars in Burnt Common, Ripley, Surrey. Connaught had built quite successful front engined single seater Grand Prix cars in the fifties. The racing cars had long gone, but Connaught's owner and former racing driver Alan Brown, ran the property as a garage and exotic car sales business. Connaught had been appointed agents for the Ogle Mini, and there sitting on the forecourt that day was an Ogle Mini with Mr. Brown's personal number plat "AB 1000", it looked fantastic to me, and instantly became a favorite for me."

"Another trip was to Byfleet, Surrey, to visit 'Ingham Engineering' to purchase Hi-Lo's for my father's Mini, but of more interest to me was the GTM mid engined coupe which they were manufacturing. This looked fantastic, it's racing car stance made the Ogle look a little pedestrian!"

"I'll never forget my excitement whilst waiting for the school bus, to see a "sports car fronted Mini", I saw it often, but in those days of no internet it took months to discover that this was a "Scorpion Mini Conversion", a sort of "E Type Jaguar" graft-on nose for any Mini derivative (see here-JB). Some years on from this, again waiting for the school bus, a very sophisticated Mini based buggy, with 13 inch wheels and a corrugated military appearance. It took years to discover this was a Siva Mule, an extraordinary sighting!"

"Hope this brings back some memories for older enthusiasts, Tim."

Being a younger enthusiast I love the stories, too, Tim! So thanks for that and keep them coming. I've also searched my files for ads of Connaught Garage in relation to the Ogle, but couldn't find any. What I did stumble upon was an ad for the Cox GTM which mentions 'Ingham Eng. Ltd.' in Byfleet, Surrey. In fact I know their demonstrator was registered 'JDB 260E' and was yellow of colour. It's also the car that made it to the cover of Cars & Car Conversions in June 1967 and you can see it briefly in this film footage. Anyone out here who knows what became of it? 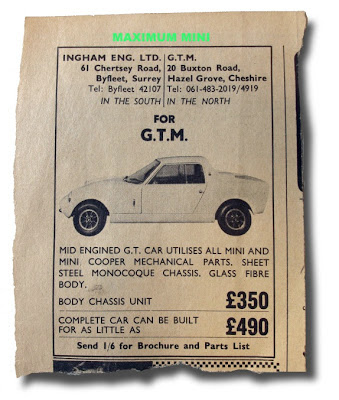