Okay. Take a good look at the very 1970s picture below. It's a cover shot from 'The Motor' in 1975. The centre attraction is the opulent Panther De Ville. But there is some more opulence in there as the three Minis shown are all far from standard. The thing is that at least two of them are pretty mysterious, so there's a good reason for showing them here.

Right behind the Panther De Ville there is a namesake: the Tilling Mini De Ville, which I reckon is the least known of the three. Among its interior features you will find tinted and electric windows and quarterlight, plenty of veneer, a centre armrest and an adjustable steering column. Stranger is the exterior rear treatment, of which the article says this: "By special treatment, the roofline above the rear window is raised and moulded to simulate the traditional 'Landau'." But unfortunately there's no good picture showing this. Perhaps anyone out here knows more about Tilling and their Mini conversions?

Then there is the Oyler Contessa with its door open. That car, built by Oyler Coachtrimmers of Halifax, is a trimmed treasure indeed. The Oyler company was part of the Homfray Group - big carpet manufacturers and so the interior was richly equiped to say the least. 'When they've finished, you wouldn't know it was a Mini' Motor magazine writes. Apart from carpets and dralon everywhere you could also find cigar lighters en suite with champagne panniers and chrome glass holders. But the Contessa also is a hidden treasure as information about Oylers coachbuilt Minis is so scarce. The car in the article is said to be owned by a Mrs. Stephenson, and I believe it to be the same one as in Oyler's brochure. Did they ever build any more than that?

Last there's the car on the right back behind the Oyler Contessa: a Wood & Pickett Mini Margrave that's been fully deseamed. There's lot and lots more information about W&P to be found and it's a fact that many more Margraves were built. But how about this particularly good looking chestnut brown example? 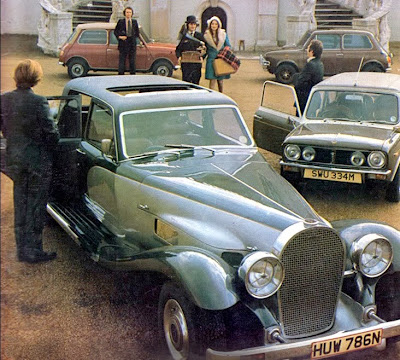