Mini Jaba found in a scrapyard

Barcelona based Mini enthusiast Xavier Enrich dropped me a line yesterday about an odd Mini that was found in Spain recently. Some pictures were posted on a website, too, mentioning this may be a possible 'Mini Broadspeed Foral' - whatever that may be. Xavier added: "It seems to be a modified Authi Mini Mk2" and I'm sure he's right there. What's more: I know a bit more about the car in question.

This actually is the Mini Jaba, made by a company called 'Transformaciones Jaba' in the early 1970s in Navarre. The Jaba was meant as a neo-classic mimicking a 1930s car but based on the Mini. It was shown on the Barcelona Motor Show of 1971 and made it to a Barcelona concours, too, see picture below. The car on that photograph comes with the same fibreglass flip front, front fenders and headlights. It also has the same Dunlop wheels and comes with a chrome horn or grab handle on its side - the green car appears to have holes on the same place. The roof conversion, however, looks different. Was there an overhanging drop top fitted? Looking at the rear of the scrap yard car you can see this could well be possible. There was clearly some sort of Landau roof one day. The modified boot lid seems to have carried a spare wheel, too. That fits the 1930s theme well.

But is it the same car? Below the green paint there are clearly traces of white. However, with what looks like green carpets and seats inside it could well be that this car has been green for longer - making the concours car possibly another one. Unfortunately I don't have any more information and so it would be nice to learn if anyone out here does. Fact is that this is definitely a contender for 'Find of the Year'! 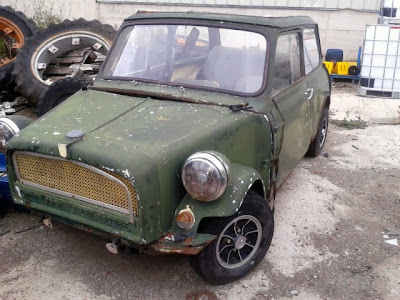 Found in a Spanish scrap yard: this is a Mini Jaba - inspired by the Magenta?
Picture courtesy foromini.minibcn.net 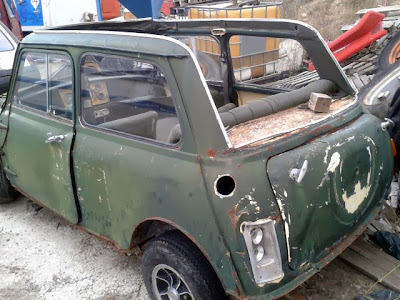 The car is based on an Authi Mini Mk2. Roof and boot lid are heavily converted
Picture courtesy foromini.minibcn.net 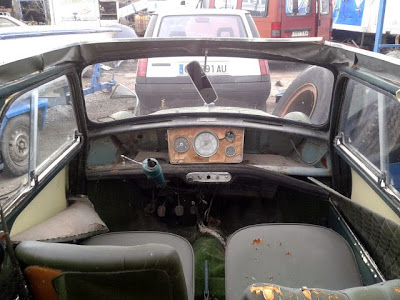 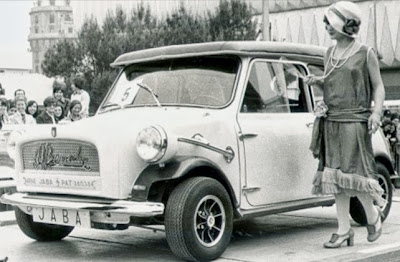