2014 Is not over yet, but as you know my list with the 5 candidates for the title 'Find of the Year' has already been made (voting on right hand side of this blog please). I may have been too soon though, as Vix Fisher-Garrett‎ emailed me yesterday with an exciting barn find of not one but two Mini based cars of the 1960s: a Cox GTM and a Peel Viking. She wrote: "Hi Jeroen. My father has just recovered two cars from a barn in Yorkshire where they have been since the mid-1990s. They are in an extremely sorry state, especially the Peel."

"From documents that came with the car we believe the Cox may have been originally fitted with a 1120cc supercharged engine for hill climbing. The car is based on a 1961 Mini Van, and we have the original order to Cox in 1968 and invoice dated March 1969. There is a letter from 1972 from Allard's giving details about supply of a supercharger for it, to be used for hill climbing, using a 1120cc engine. There are photos of it from the 1990's when it was owned in Abergele, Wales, where it appears to have been fitted with 13" wheels and riveted on wheel arches. At some time the rear subframe has been fitted to a modified square tube space frame. It is now fitted with a 1000cc engine with twin SUs. The original invoice shows chassis number as BCW1- 146M7 but as of yet we have found no plate on the car."

"We know very little about the Peel. It does have a plate on the dashboard saying 'Peel, Isle of Man' and showing a number 809. It also has a round badge on the front for Peamore Garage, Alphington, Exeter, which is presumably a dealers badge. Registration document shows the original Mini was a 1964 model, 850cc. We have no idea why it has a 1980 registration plate on it now. From 1982 until it was sold in the mid 90's, it was in Devon. It has not been on the road since 1995, when it belonged to someone who lived near Exeter in Devon."

I have asked Vix what she and her dad plan to do with the cars and I was exited to near they may bring them over to Blyton Park in May next year. Vix: "He won't consider selling them as they are part of our collection, between myself and my father we have the Peel, the Cox, a Domino Premier, a Domino HT, a GTM Rossa and a Phoenix, until recently we had another Premier but that has gone on to it's new home. We are hoping to attend the Mini day in May with at least a couple of these, even if one of them arrives on the back of a trailer. Any history relating to these cars would be gratefully received." I haven't found anything specific on both of these cars but somebody else out here may know more…? 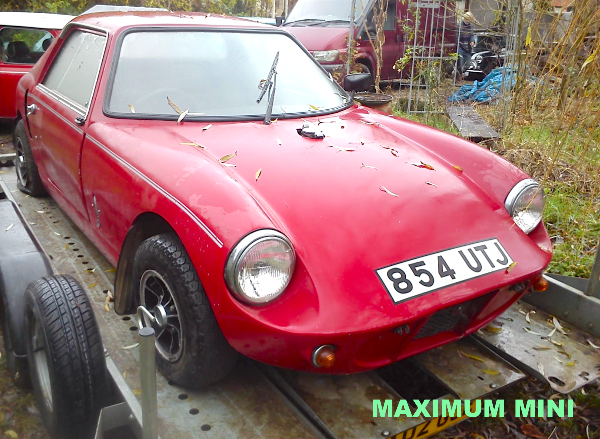 Another unspoiled Cox GTM, as recovered by Vix' father from a barn in Yorkshire
Picture courtesy Vix Fisher-Garrett 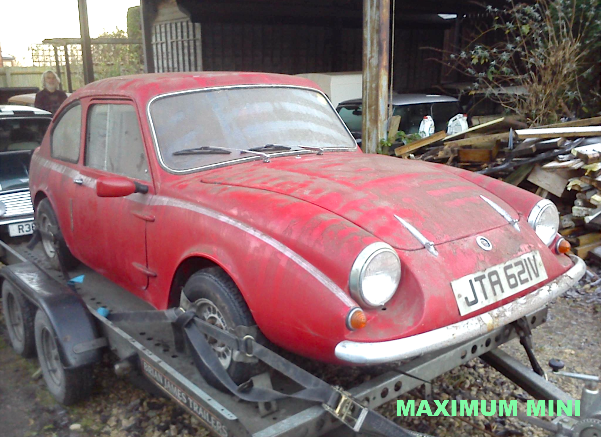 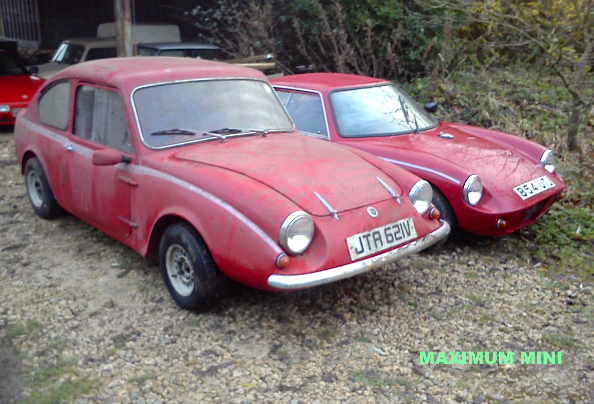 Happy together. Note the difference in size: the Peel is small; the Cox diminutive!
Picture courtesy Vix Fisher-Garrett