Historically speaking, today is a bit of a milestone for lovers of Mini derivatives. It is on this day 50 years ago that the doors opened to the 7th Racing Car Show in London. And although the previous six editions had seen several Mini based sports cars - the 1966 edition topped them all with the Mini variant scene brimming as never before. They were simply not to be missed. And so, looking back, this was the best year for us lot. So let's have a look back at the cars on that great Olympia show, in alphabetical order starting with the 'B' for the Broadspeed GT today. Broadspeed Engineering Ltd. of Birmingham took a whole load of go-faster goodies to London - cylinder heads, carburetors, camshafts, manifolds, exhaust systems, tachometers and a 'reverse gear gate stop' - the majority of them for the Mini, but also for the Austins and Morrises 1100 and 1800.

But star of stand number 46 was undoubtedly the Broadspeed GT 2+2 in Old English White. The car made it to several magazines, also aided by a model in a super trendy outfit - the same suit they'd used for brochure shots. The Italians liked it and wrote about the GT in Auto Italiana, not forgetting the girl. They asked her name and Liz Corbett posed for them with a smile. I have tried to find Liz but so far to no avail. Let us know if you come across this write up Liz! Remarkably, a Broadspeed press release also states that 'demonstration runs in the GTS competition version can be arranged during the show, by appointment.', so the GTS probably was parked outside. As you will know both cars survive today in the hands of Chris Wooden. Happy anniversary to them! Tomorrow: Camber GT and Cox GTM. 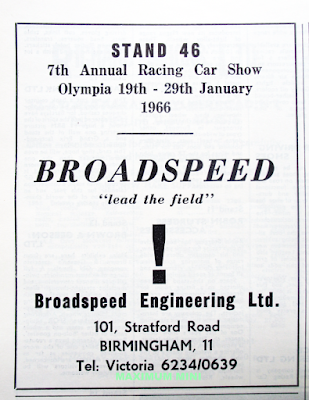 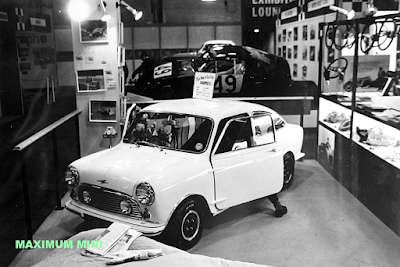 Getting ready for the show - Broadspeed GT looks great. Behind it the Le Mans Sprite
Picture Jeroen Booij archive 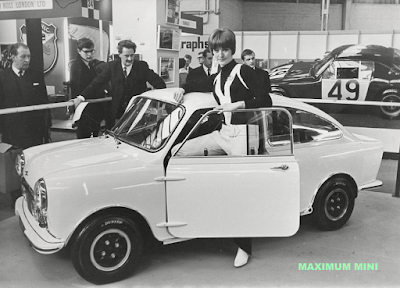 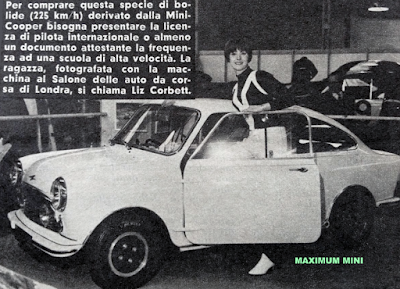 And now smile! Auto Italiana magazine liked her too. Where are you now Liz?
Picture Jeroen Booij archive 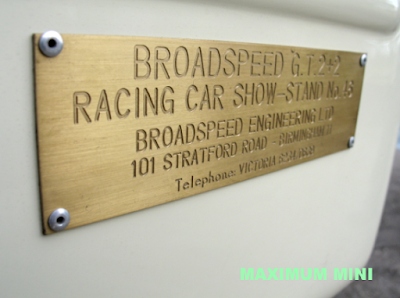