Resurrection of the Sandringham Six Mini

Another mystery solved! The mysterious Sandringham Six Mini that was seen here twice (here and here) with the request for more information rung a bell by reader Kees Plugboer, who'd seen it in a magazine and started a search in his attic. Out came a June 2000 issue of Mini Magazine with, indeed, a feature on the car. And it's an interesting story, too. As believed, the car was owned by Sandringham Motors boss, Peter Jones, and dreamt up by his brother John. Peter was quoted in the article: "I'd never driven anything like it. Having various motor dealerships, I'd owned 19 new Rolls-Royces and Bentleys, plus Mercedes, Aston Martins - all sorts of cars. But I used that little Mini so much, and even transferred my personal number OD 1 to it, which seemed quite appropriate really." Initially, the car came with the standard Clubman-front, but when Peter's wife had a collision with his Rolls-Royce Corniche, and the grille had to be replaced, the idea came to fit that to the Mini.

Peter continued: "Then, for some reason, after driving the car for about four yearsI sold it to a family in Norfolk. I kept the original pate, of course, so the Mini was back on its original number BWS 30S. I regretted it almost immediately, as you often do - I really missed the car, and not long afterwards I tried to buy it back, but they had already sold it on Traveling around the country, I always kept an eye out for it - after all it wouldn't have been difficult to spot!" Eventually the car was found in a scrapyard near Great Yarmouth, where it had been lying neglected for eight years. Despite the fact that most of the remarkable Mini was ruined, Peter did buy it back 'for silly money', with the idea to fully restore it to its former glory. Well… Peter, back in 2000: "Of course, I'd have to restore it - we have all the facilities. That was the original plan, and I even acquired a couple of old Minis and put them aside to use as donor cars for the job. But now that we've had a chance to look at it properly, it's beyond that, totally rotten - except for that grille of course! So we're going to start again and build a replica around that grille."

The article mentions that Peter bought a brand new heritage body shell plus engine and reckoned it would cost him some 14,000 GBP by the time it was finished. "But it will be my personal car for the rest of my life." he added. "I've certainly learnt my lesson - there's no way I'll ever sell this one!" Now, once again, how did it end sixteen years after the article was published? The search continues... 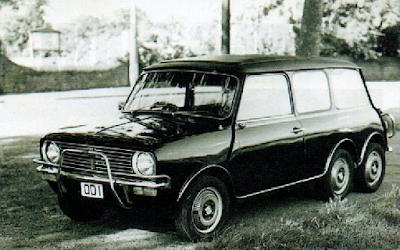 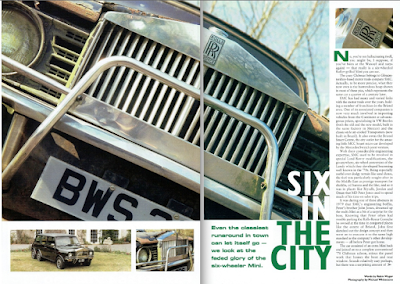 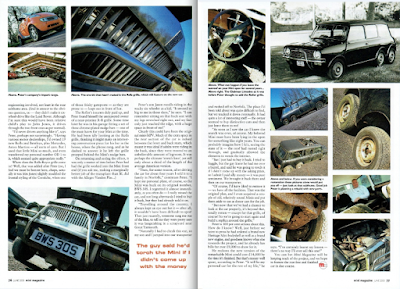 And reader Kees remembered it, dug it up, scanned it and sent it over. Hat tip to you!
Picture courtesy Mini Magazine