Beyond the books: the Halec Special

Tim Harber is a regular contributor to my books and blog, with material unseen before. And he did it again a while ago. Tim wrote: "I finally may have notified you of a special that you never heard of! This machine was done for racing in the sixties. I came across it 15 years ago or so, with one of our locals when he was racing it. He subsequently converted it to run on the road. 18 Months ago he had an accident and broke his back and now he’s in a wheelchair. He’s been trying to convert it to hand controls and is struggling and has considered converting it to automatic. I will try to go and see it and see what we can suggest and I have put him in touch with a local who also is now wheelchair bound but is a Mini nut. The car (bike?) is called the Halec Special. Sounds like the usual Harold and Alec mash. The owner is now 70 – odd but shows no sign of giving up being silly. I’ll keep you posted on progress. Oh, the 'Dandy Dragonfly' that you put in Maximum Mini 3 nearly caused a heart attack with the owner. I think he said when he first saw the picture "I used to have a bike a bit like that!” and it took a few minutes for him to comprehend it all. Well done you for giving another oddball Brit a bit of joy! Tim"

Funnily, just weeks later I received a bit of film footage from French Mini based three-wheel-fanatic Damien Lescroart, showing a race of the Vintage Motor Cycle Club of 1999 with sidecars and three-wheelers racing at Lydden Hill. Some real off-centre stuff. Damien wrote: "Car number 12 seems Mini based. Anyone knows what it is?" And, you guessed it. It happens to be the very same Halec Special. I have included the video clip below, which shows some good racing. When you look closely at the end of the film, you'll see that the Berkeley three-wheeler - number 13 in the race - was also Mini powered. Thanks chaps! 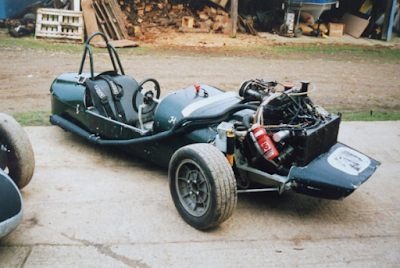