The news that Europe's car crash club Euro NCAP is 20 years old, made me wonder how many Mini based cars ever made it to an official block of concrete. The facilities at MIRA in the UK are much older and there must have been at least some of them over there? The Midas Gold is often claimed to be the first composite car to pass MIRA's ECE30 crash barrier test to ensure TUV approval, to sell these cars overseas. But there had been others. The Autocars Marcos estate, for example, had been crash tested here as early as june or july 1970. And then there was the fiberglass bodied Peel Mini that went there perhaps even as early as 1966, when it was conceived (update: according to Bill Bell it was 1968). But there were other facilities, too. The McCoy was tested at Heriot-Watt University in Edinburgh, where a crash test was carried out, too. I'd love to learn a bit more about all of these, or perhaps others? Let me know when you know more. 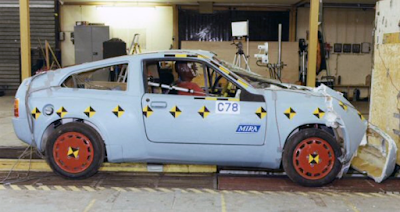 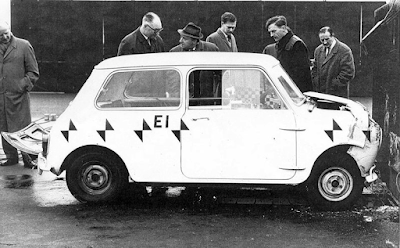 But this composite car made it way earlier to the concrete block of MIRA: the Peel Mini
Picture Jeroen Booij archive 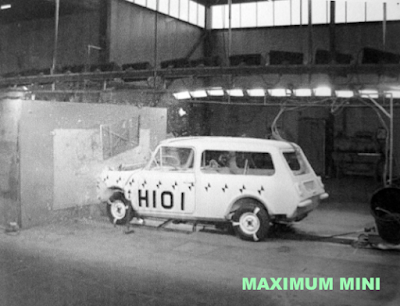 This is not the McCoy, but its forebear the Clan Crusader at MIRA. The Mini-based McCoy
was crash tested at Heriot-Watt University in Edinburgh
Picture courtesy Clan Crusader Owners Club


UPDATE 17 February: A reader has the full and confidential report of the Midas at MIRA unearthed… Click here to see for yourself.
Geplaatst door Maximum Mini op 13:47