Marples' Mini under the block

The famous hatchback Mini Cooper 'S' of the late Postmaster General and Minister of Transport (1959-1964) Ernest Marples will be auctioned on the 26th of this month by H&H Classics at the Imperial War Museum in Duxford.

Marples wasn't a particularly loved politician. He owned a civil engineering company which was heavily contracted to redevelop the motorways of the UK while being Minister of Transport, too, leading to 'Marples Must Go' painted across motorway bridges (that his company built) throughout the country as well as car decals. And there was more. A love for prostitutes, or so it is believed; the introduction of his much-hated double yellow lines and the killing off of the British railways in favor of motorways. In 1975, Marples, who had by then been made a baron, fled the country in rather a hurry... because of tax evasion.

By that time he'd traded in his Mini for a Renault 5 at Lex Garage in Maidenhead. It was rather special, though. At the London Racing Car show of 1964 Marples spoke to John Cooper and told him he would only buy a Mini if he was able to carry his golf bags or the wine stock he took from his personal vineyard in France in the back. With a request from the Minister of Transport being difficult to ignore, John Cooper organized a meeting between Marples and Alec Issigonis to assess the feasibility of the request. But Longbridge already had the prototypes. Three of them, no less, with two of these using fiberglass rear doors and one (the Marples car) with a door made in metal. Originally it was a Morris Cooper 'S' with Surf Blue paint. Once being transformed into a hatchback, it was an Almond Green Austin registered '963 LOP'.

As said, Marples kept the car until 1974 when a new registration (KMG 840B) was put on it. Lex Garage sold it for £75 and several owners followed. By the late 1970s it had been repainted metallic blue with wide rally style wheel arches fitted and the front and rear valances deseamed. And there was a badly repaired damage at one opt the rear wings, too. Mini enthusiast Alan Meaker restored it and it was ready in 1995. The car is now estimated to sell for £70- to £80,000. Worth it? 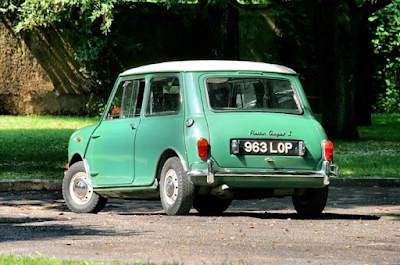 The 'Marples Mini' as offered by H&H Auctions. It's a 1964 Austin Cooper 'S' with hatchback door
Picture courtesy H&H Auctions 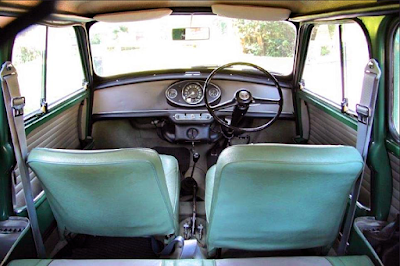 Photographing the interior was never easier thanks to that rear door… Originally the car was Surf Blue and Morris-badged. Also note padded dashboard rail and heater
Picture courtesy H&H Auctions 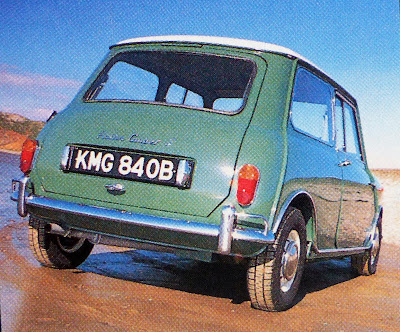 This is the car in 1995, when restored by Alan Meaker, still wearing the number it got in 1974
Picture MiniWorld magazine / Jeroen Booij archive 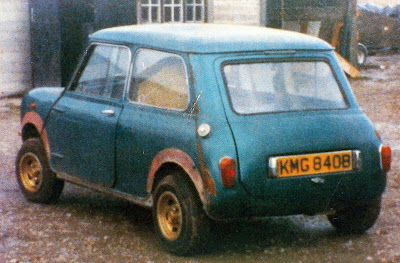 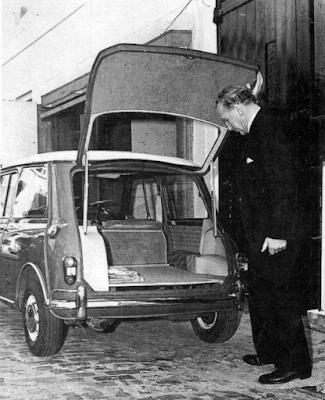 Ernest Maples with the car in 1964. He was still an MP at the time, but a very controversial one
Picture The Autocar / Jeroen Booij archive 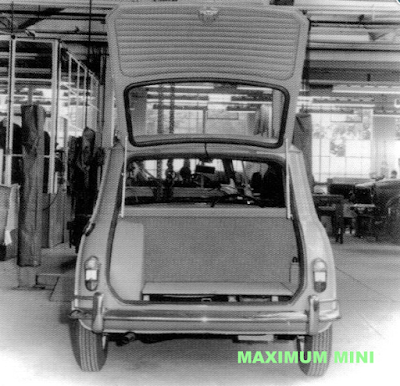 An Austin Mini hatchback in Longbridge. The same car or another? Door trim and hinges are different
Picture Jeroen Booij archive 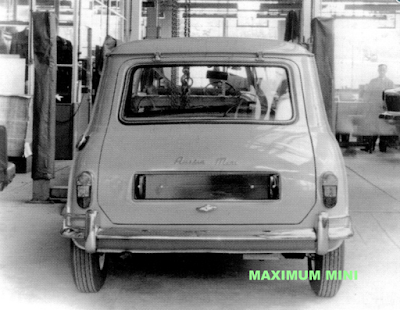 Three hatchback Minis were made in Longbridge, two with fiberglass rear doors; one in metal
Picture Jeroen Booij archive