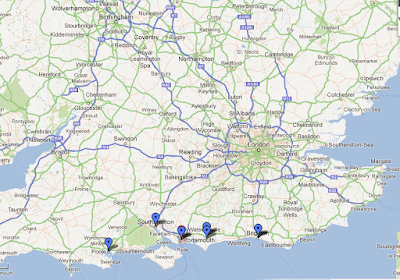 The majority of the sun seeking Mini derivatives came from the UK's south coast. No coincidence?
Picture Jeroen Booij archive

That same year, however, the Mini fun car was given a new lease of life by Domino Cars Ltd of Southampton, once again in sunny Hampshire. The company was formed the year ahead by aeronautical engineer John Chapman and GRP-expert John Ingram. By 1986 they introduced their Domino Pimlico. A bit of a cross between the Mini Beach Car and a Mini based Beach Buggy! The design of the car came from Richard Oakes who did numerous kit cars before and Fibretech GRP that also did Beetle replicas built the car’s open body. The Pimlico was immediately recognizable as a Mini but came with lots of differences too. The body was completely seamless and came with high sills, no boot lid and no doors and a ‘T-bar’. It had large incorporated wheel arches; distinctive side skirts and ‘frenched’ rear lights. Simple doors that required external door hinges were available at extra cost but most customers ordered their Pimlico without. Standard, the cars were painted in a two-tone paint scheme. After the Pimlico-success the Domino-range was quickly broadened with more models. From a Hard Top version to a Pick-Up and from the Cabrio to a lightweight racer with space frame chassis and carbon composite body shell. Domino Cars and Fibretech went into receivership in the new millennium and the assets were taken over by Domino Composites, which changed its name to Composite Designs before going into liquidation in late 2007. 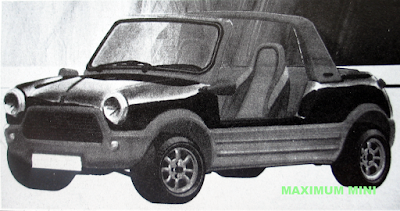 An early sketch of the Domino Pimlico. It became a best seller
Picture Jeroen Booij archive 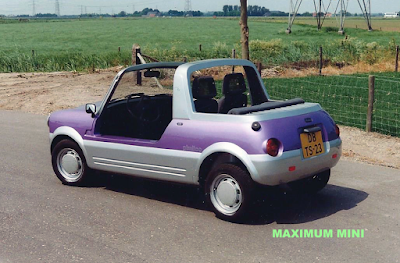 Thanks to an enthusiastic importer, quite a few Pimlicos sold in The Netherlands
Picture Jeroen Booij archive 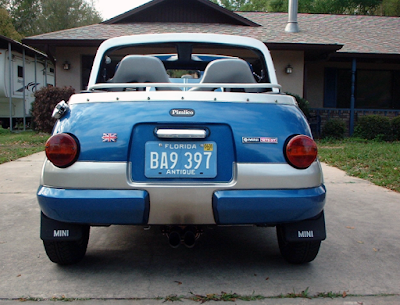 Although some went further abroad, to sunnier places, as well. This one is in Florida
Picture Jeroen Booij archive 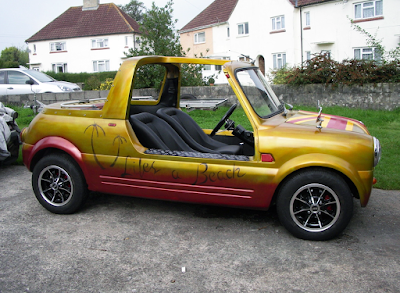 Life's a Beach! Some Domino Pimlico's even ended up with gullwing doors
Picture source unknown

There were plenty of others, too. Ranging from a Stimson Min Bug copy called the Luna Bug (this time it came from Portsmouth) and another from Scotland called the Dougal Bug, to the Cirrus – a buggy with a swoopy design of which a prototype was shown only once in public (in an incredible metalflake paint job) before disappearing forever. There were many more unofficial Beach cars built in small numbers from Portugal (Arco Iris Beach car) to the UK (Crayford Carnival; Tigmark Mini Millé), France (Fayard Mini; Jacky Mini Plage; Many Mégo Mini), Germany (L&H Mini Beach Car), Venezuela (Mini Cord Beach Car) and there was the unique Gran Turismoke from Australia and Ed Roth's Surfite from sunny California. Except from the Pimlico perhaps, all Mini based sun seekers mentioned here are all pretty rare though. Even the Stimson Min Bug of which reputedly 180 were built you don’t see on the roads anymore. So if you do know of one that’s been parked in a shed way too long, get it out before the summer is gone and the sun disappears again! 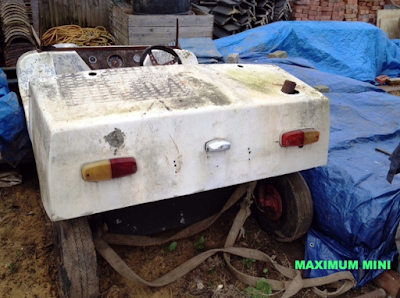 The Luna Bug turned up in 2013 (story here), only to disappear again very soon after!
Picture Jeroen Booij archive 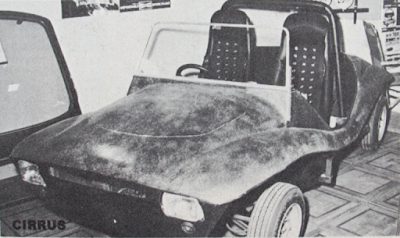 The Cirrus Mini buggy remains another mystery. This is the only photograph I have of it
Picture Jeroen Booij archive / Hot Car magazine 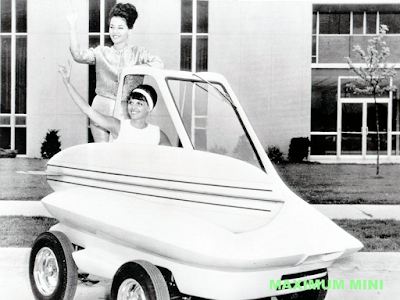 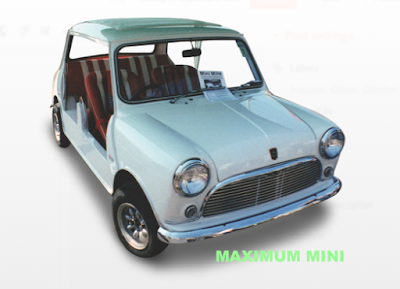